To celebrate the big EU-Turkey deal, we built an arena with four Libyan tigers in the middle of Berlin. We searched for refugees who were willing to be eaten for the successful defense policy of the federal government and for the transport ban for refugees (§ 63 Abs. 3 AufenthG) - a hyperreal Rome on the floor of the strong European Union. 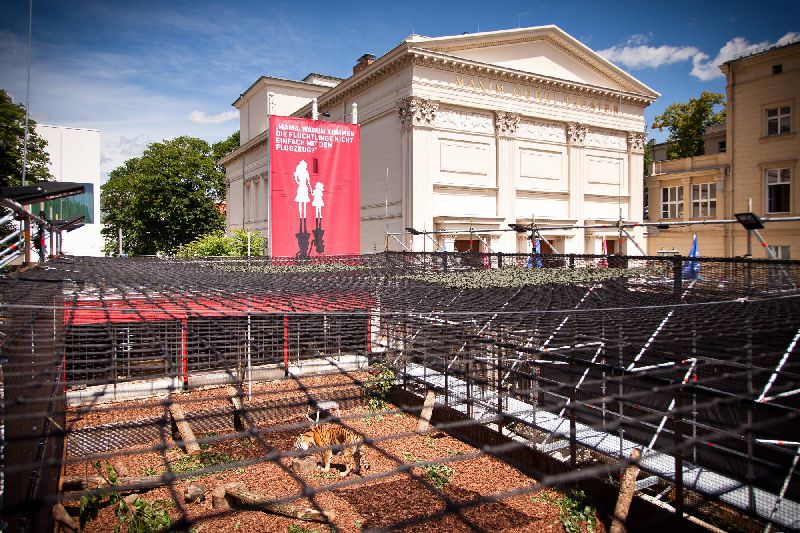 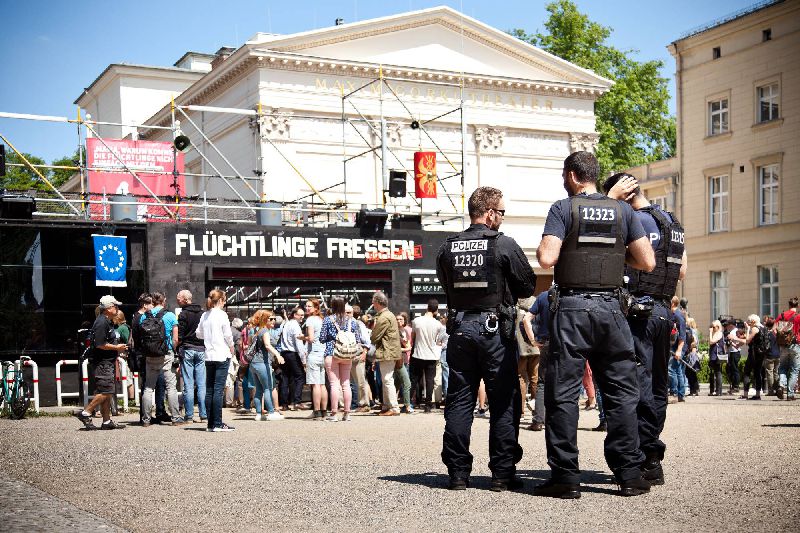 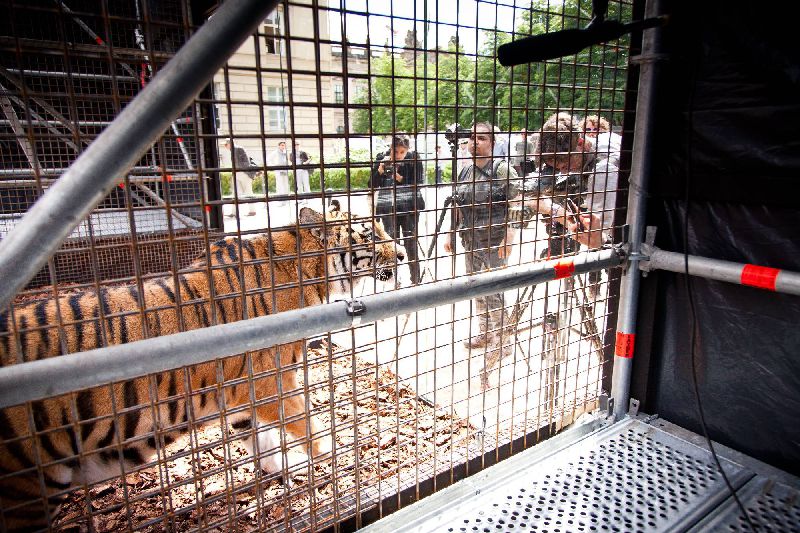 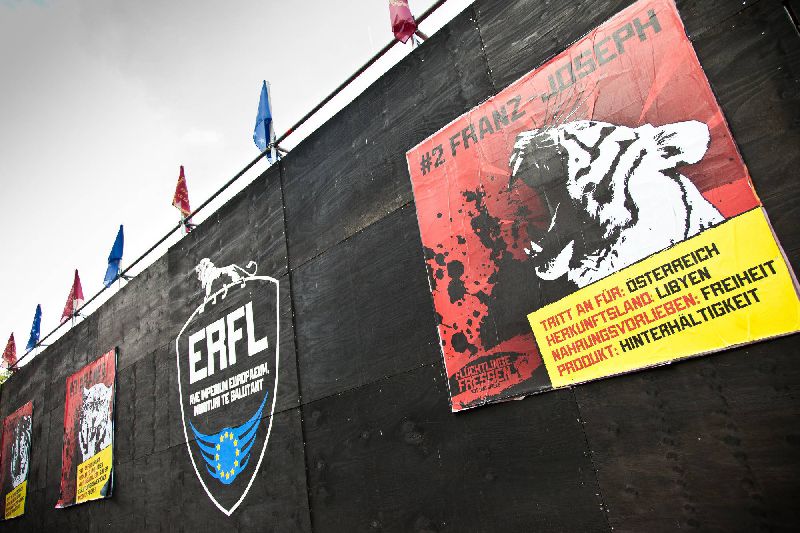 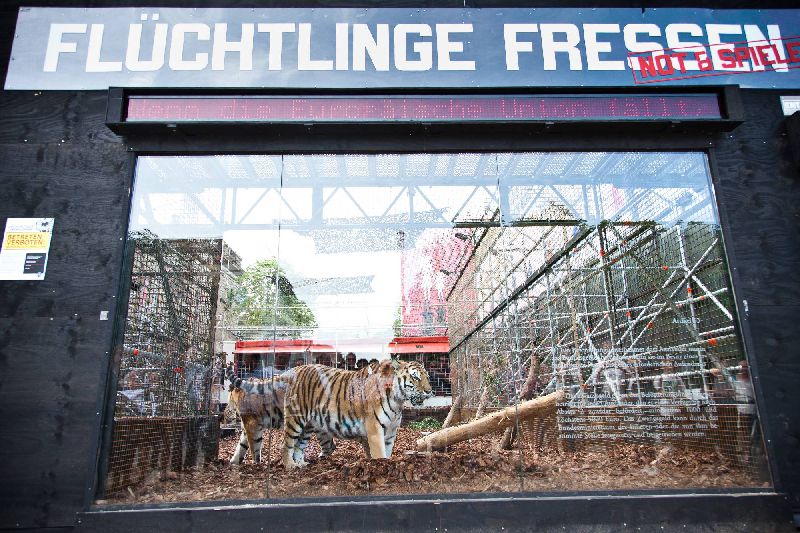 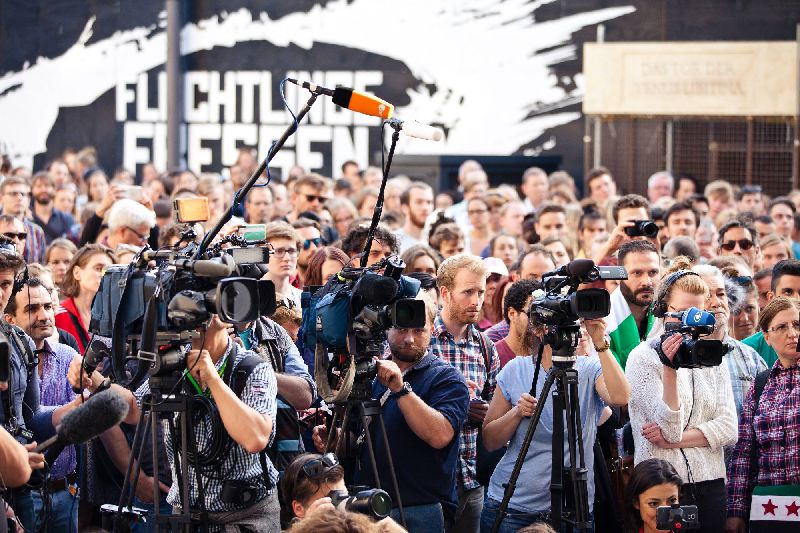 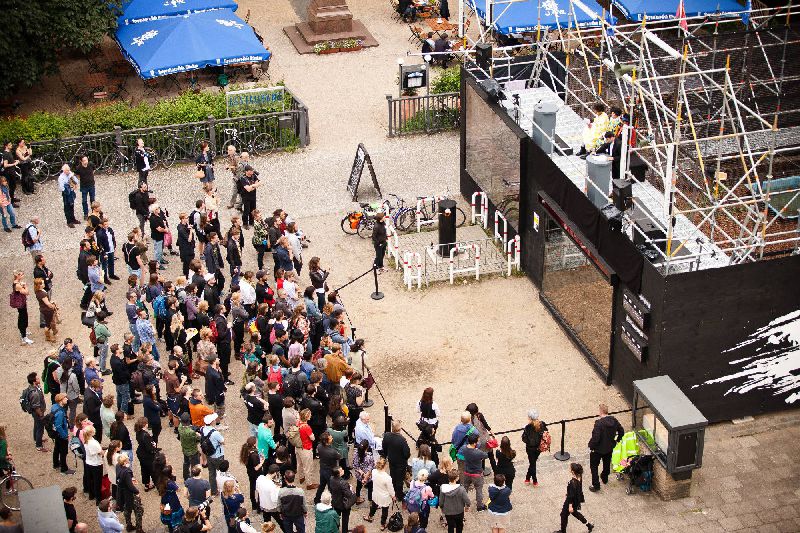 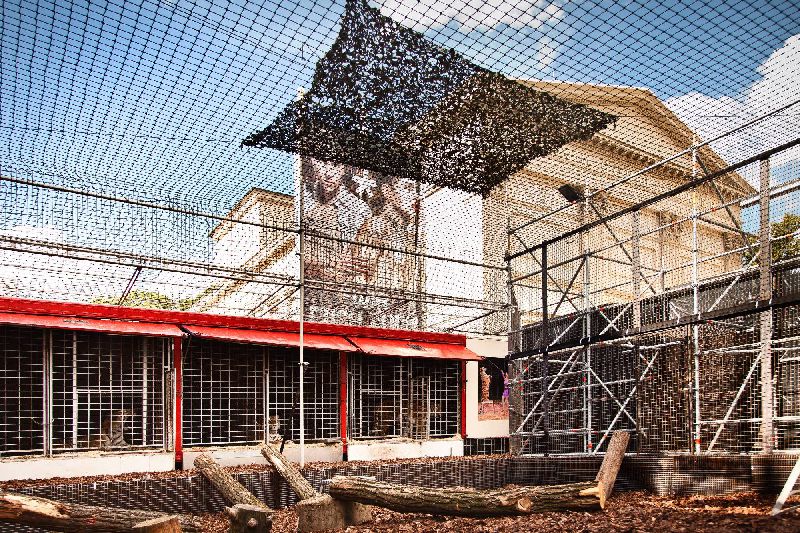 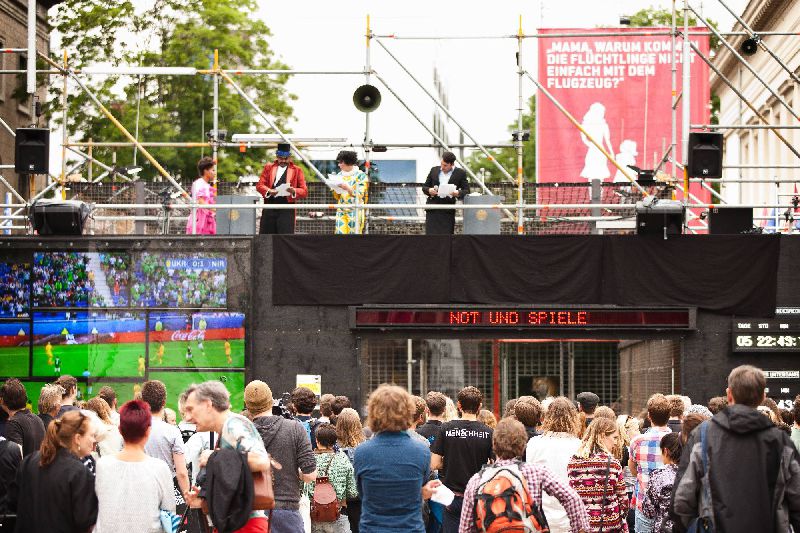 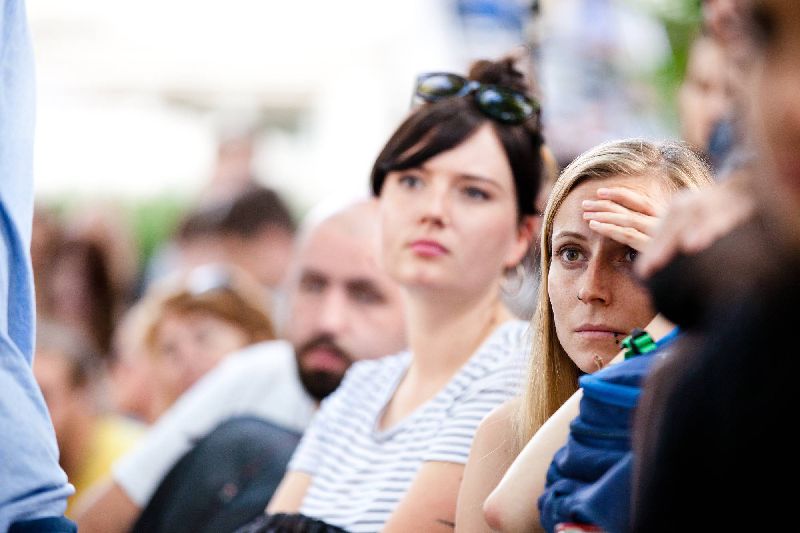 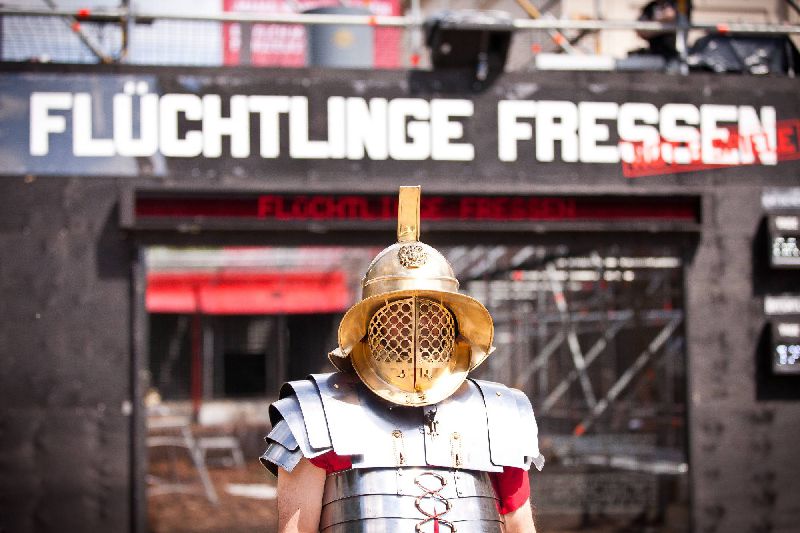 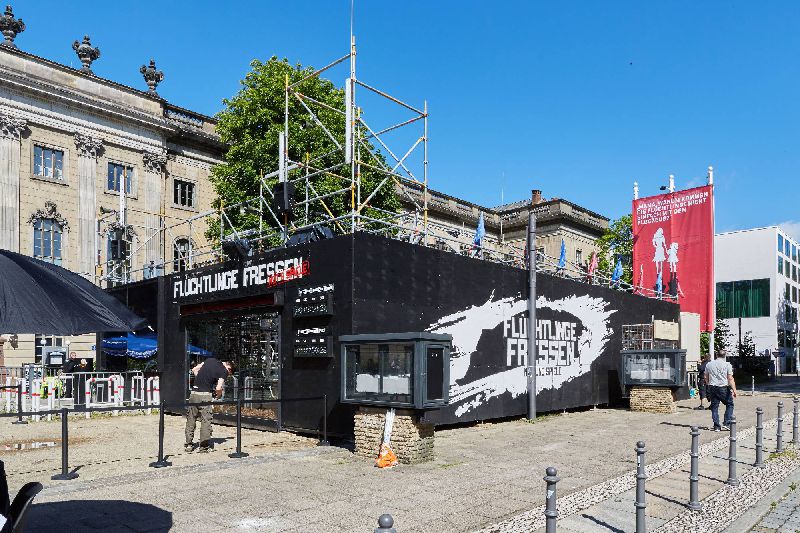 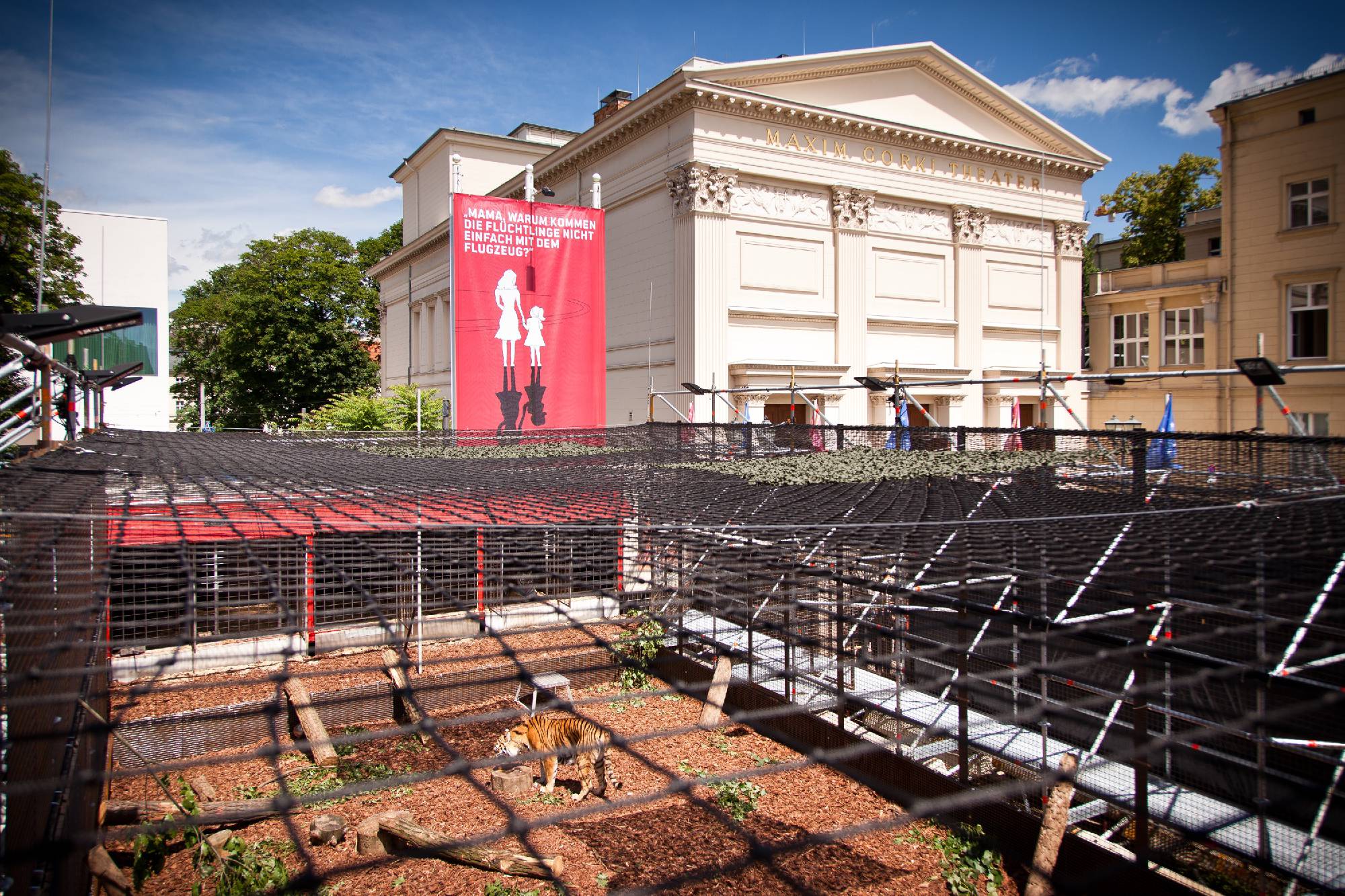 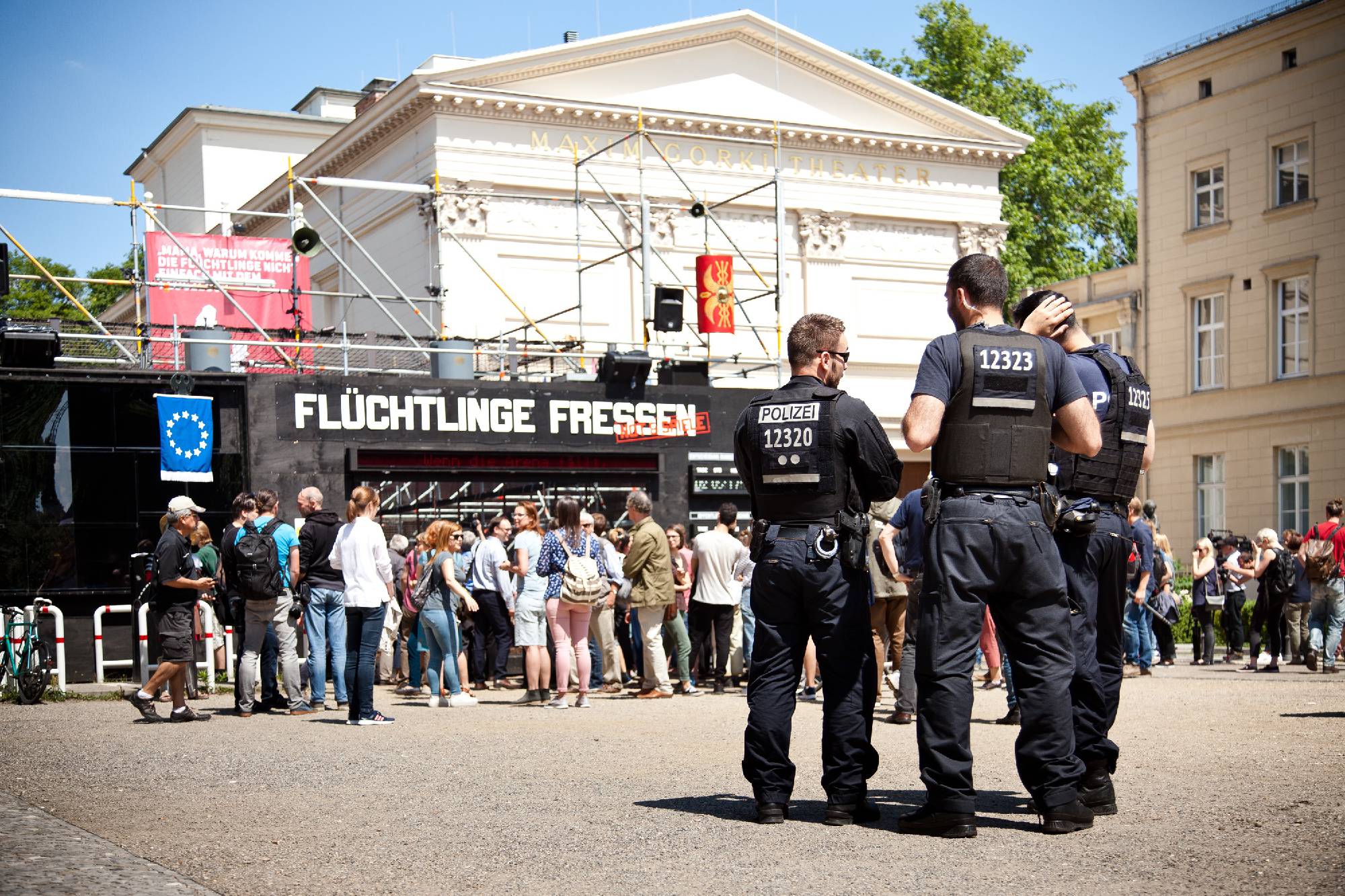 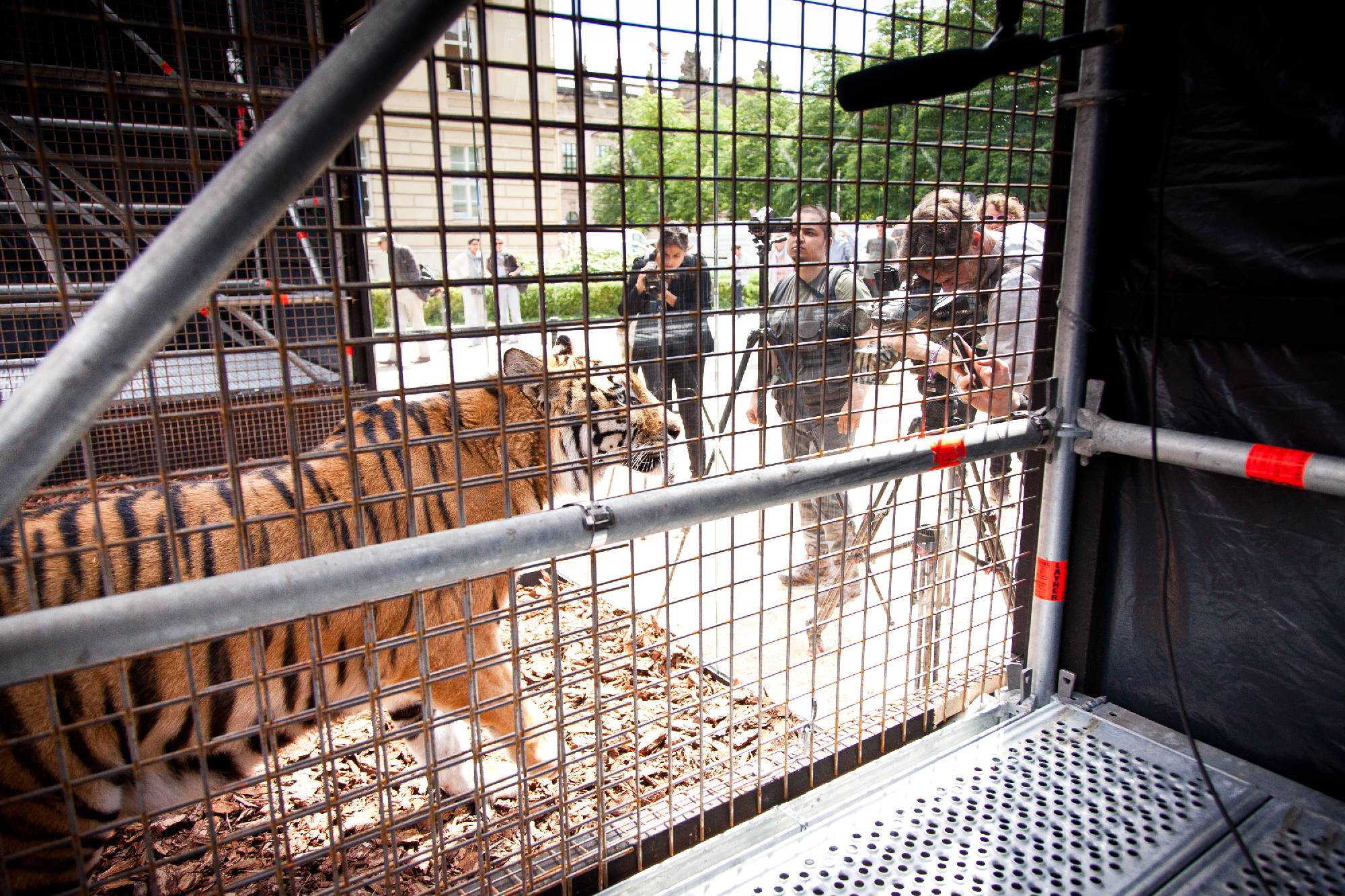 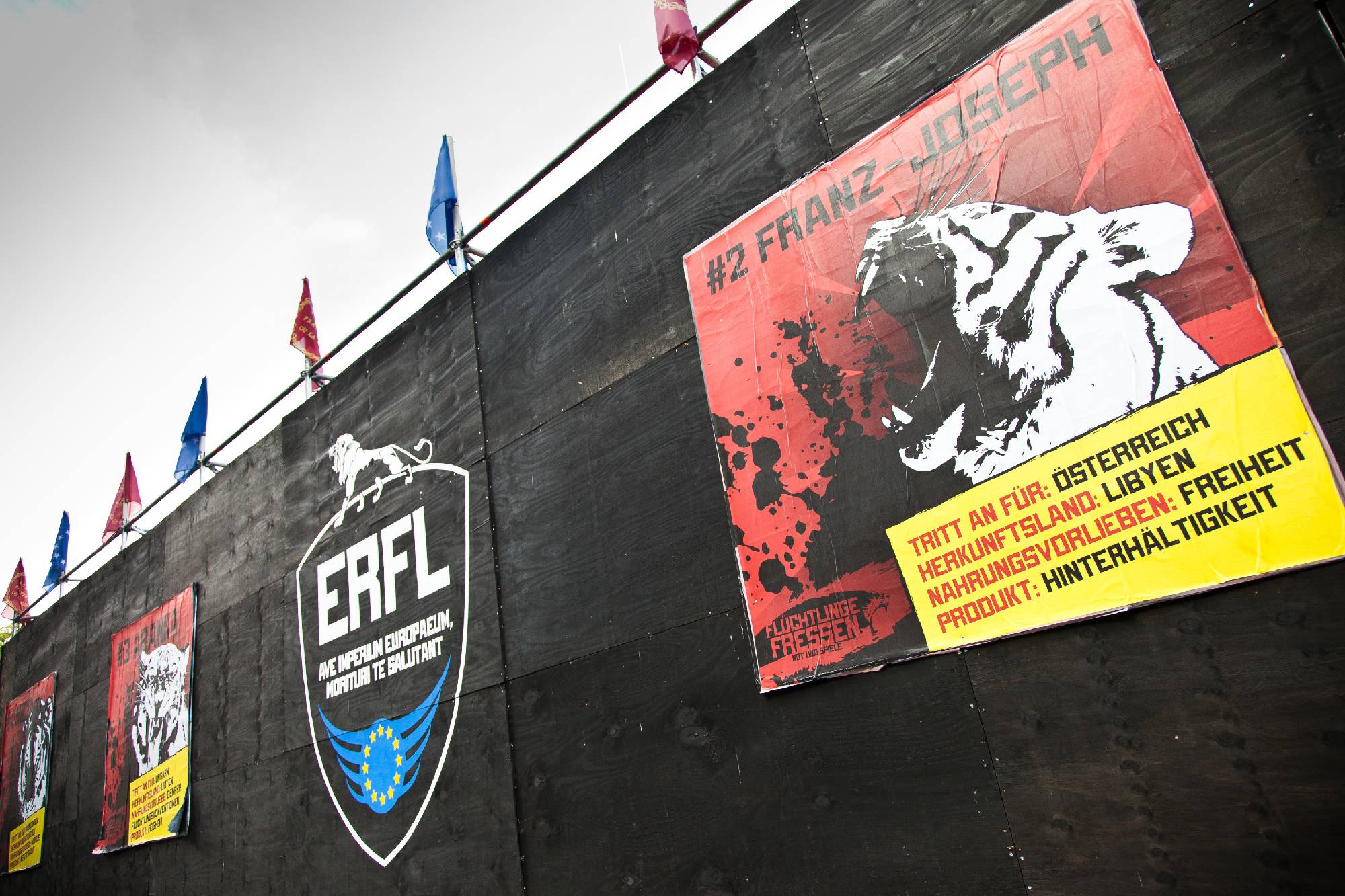 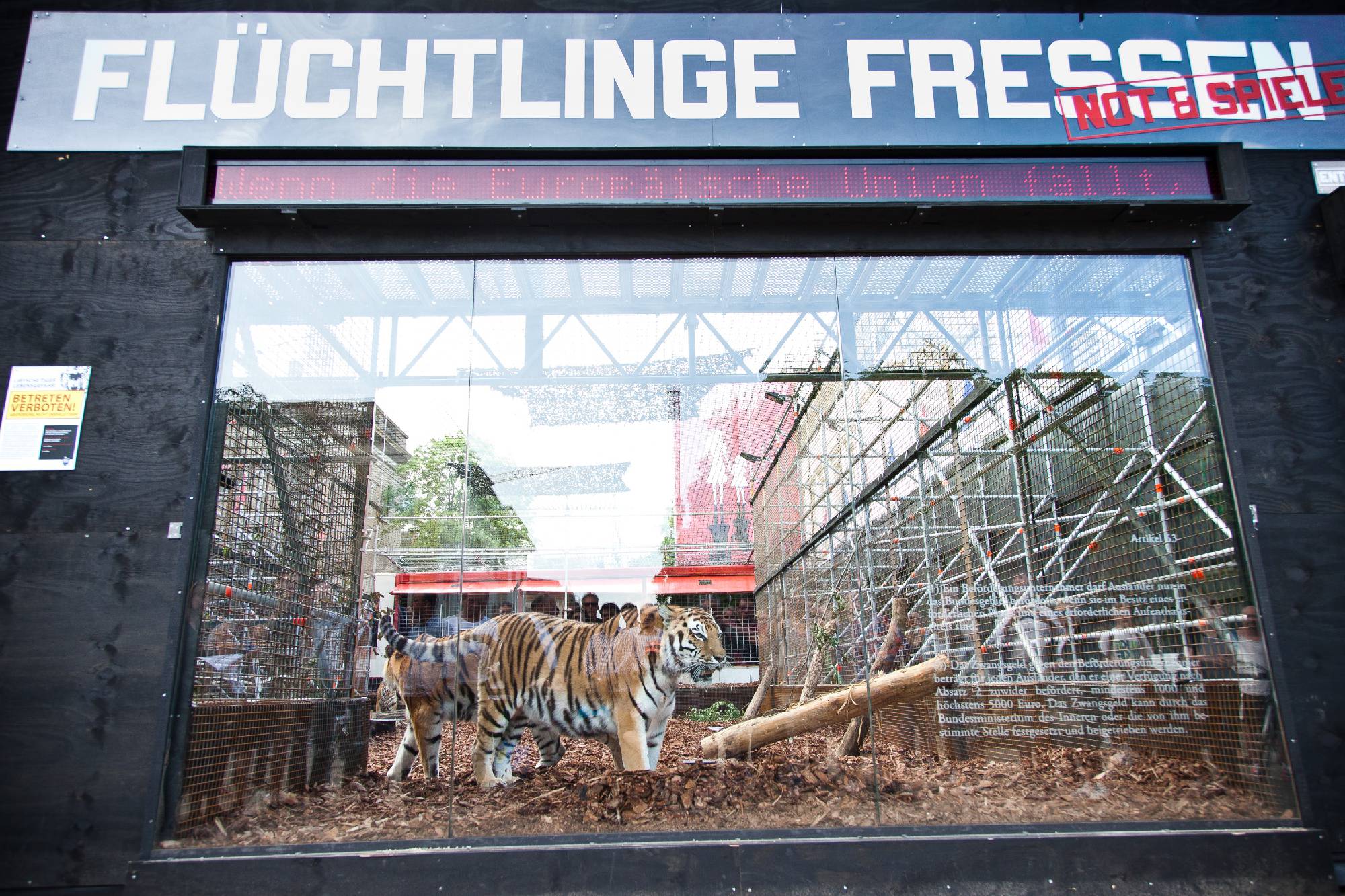 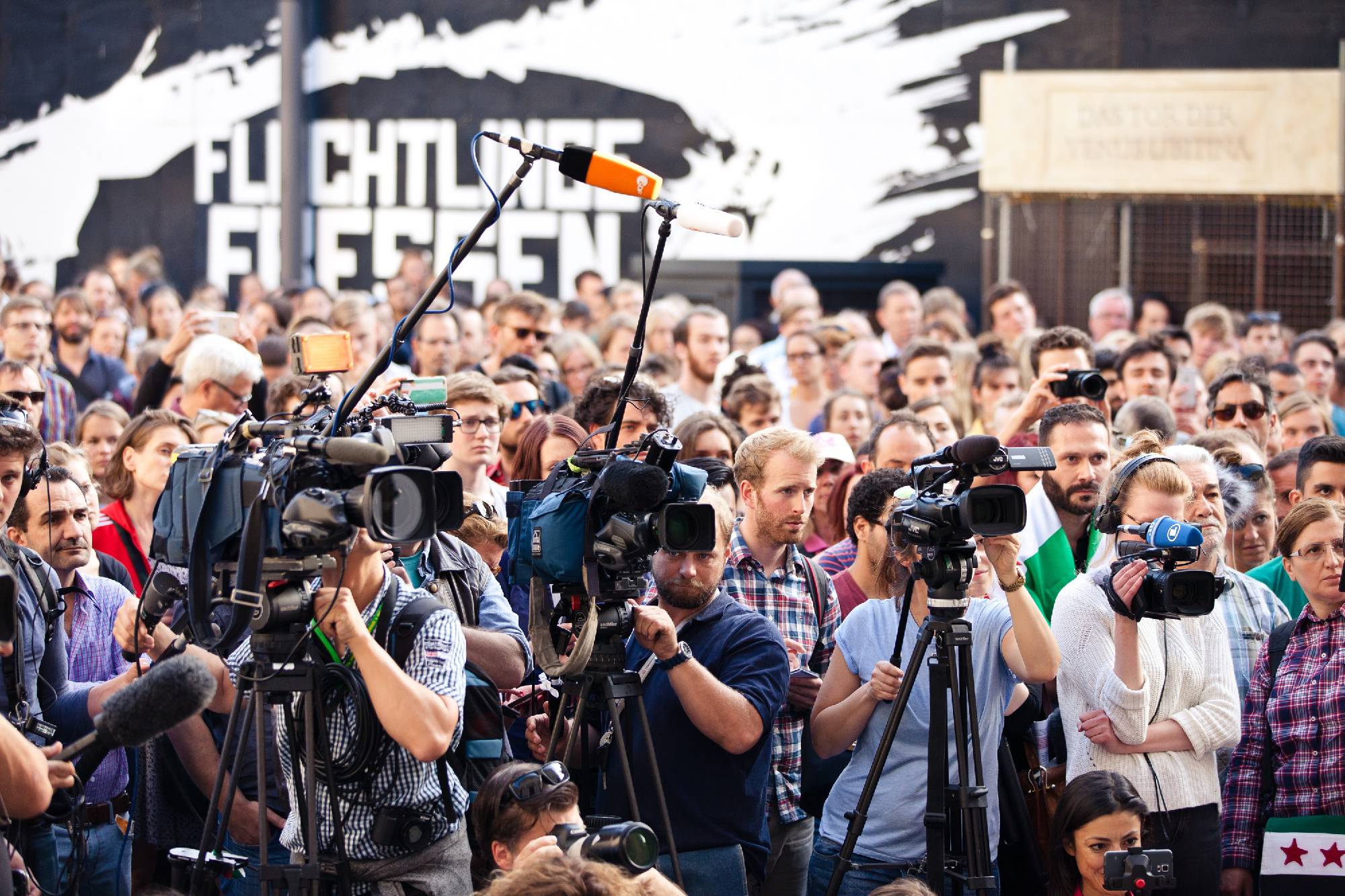 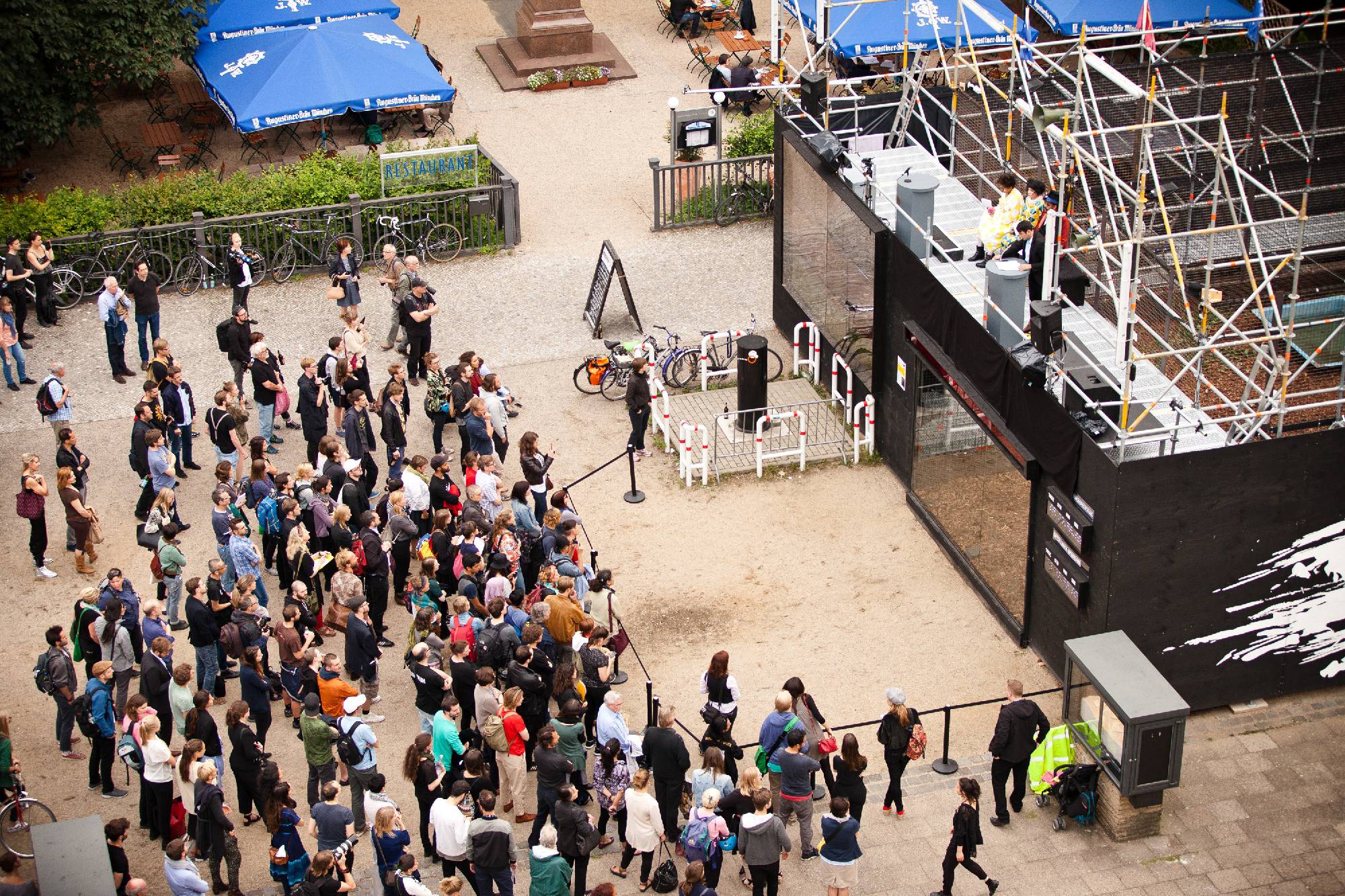 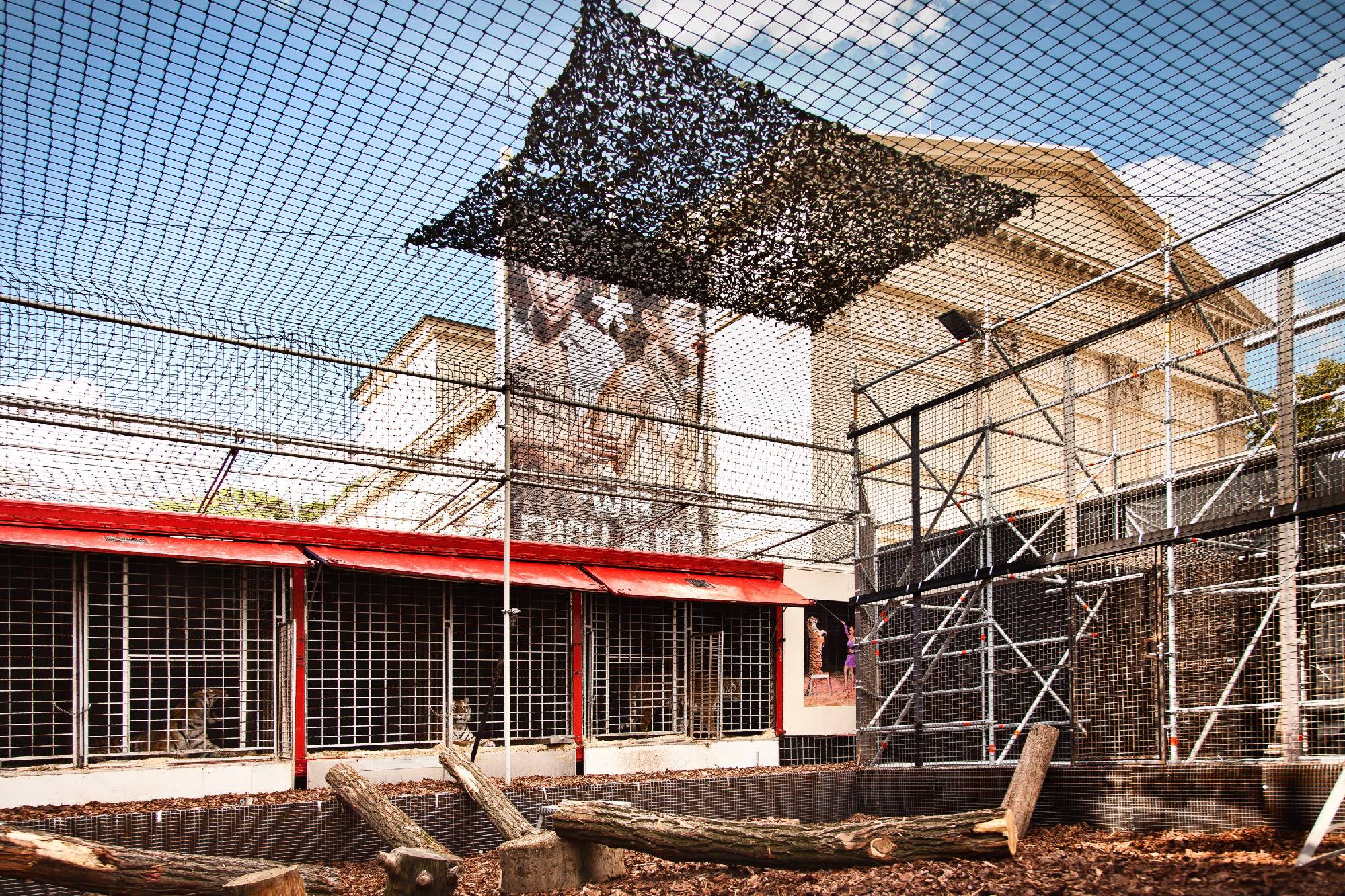 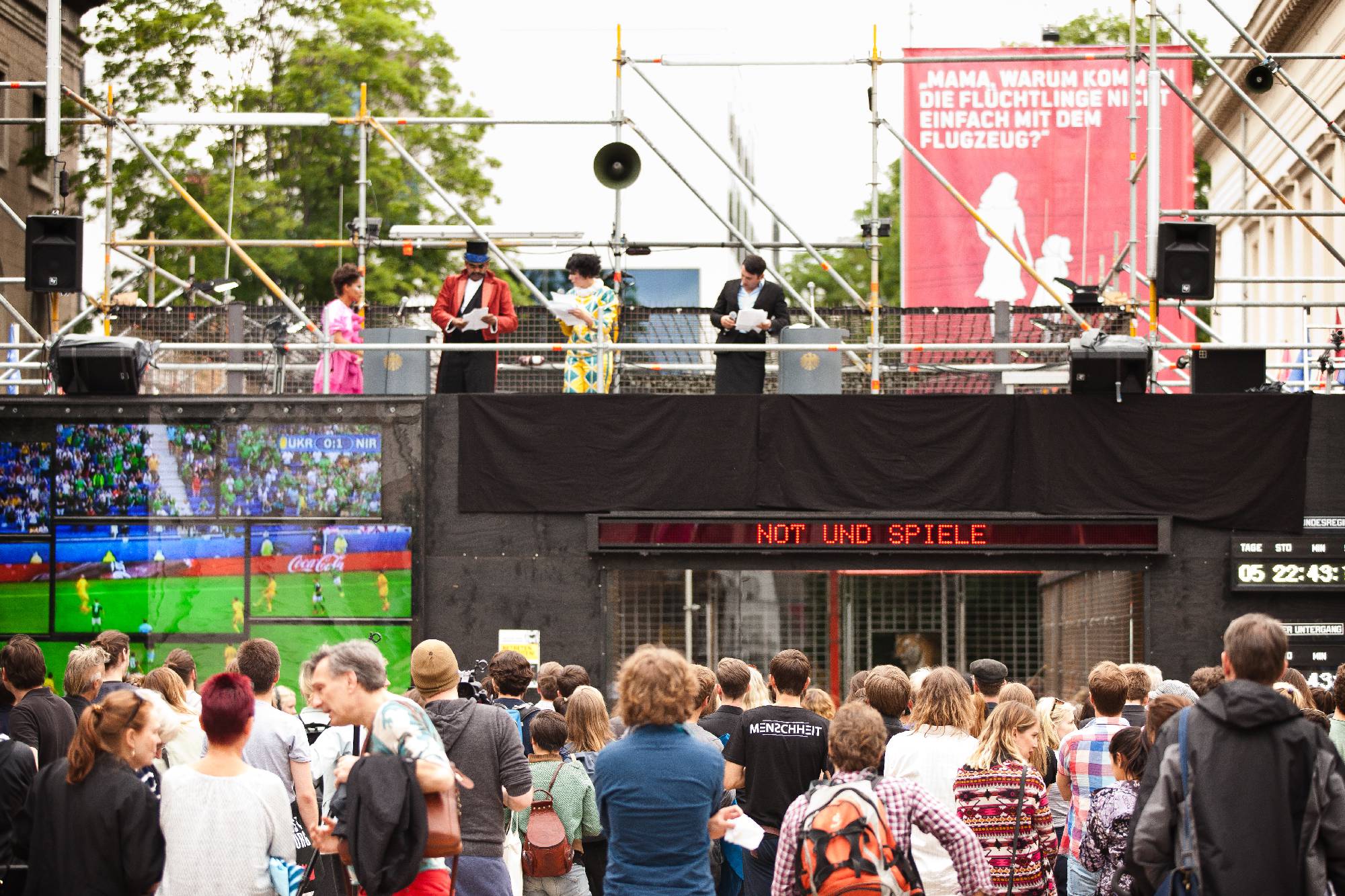 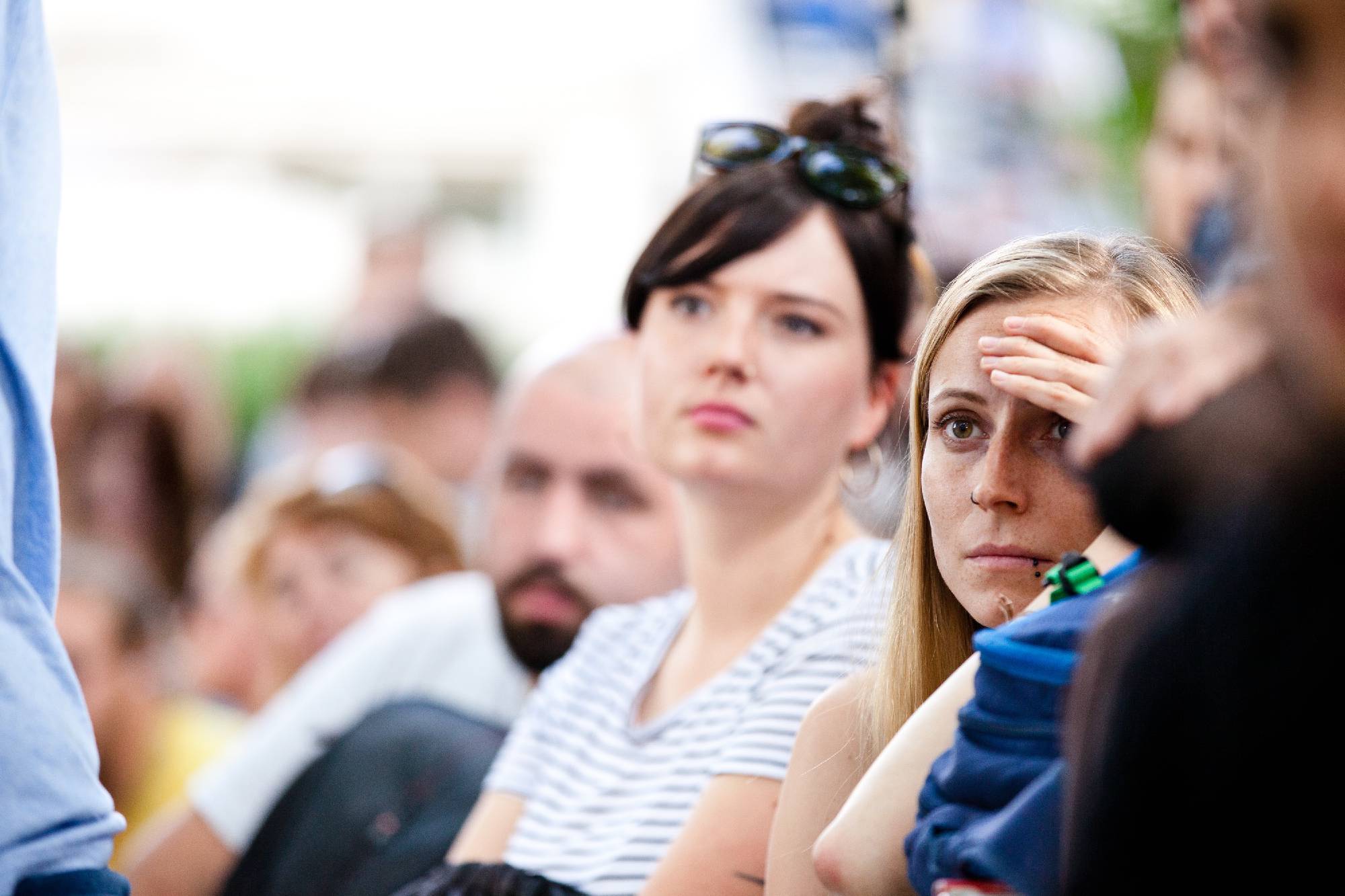 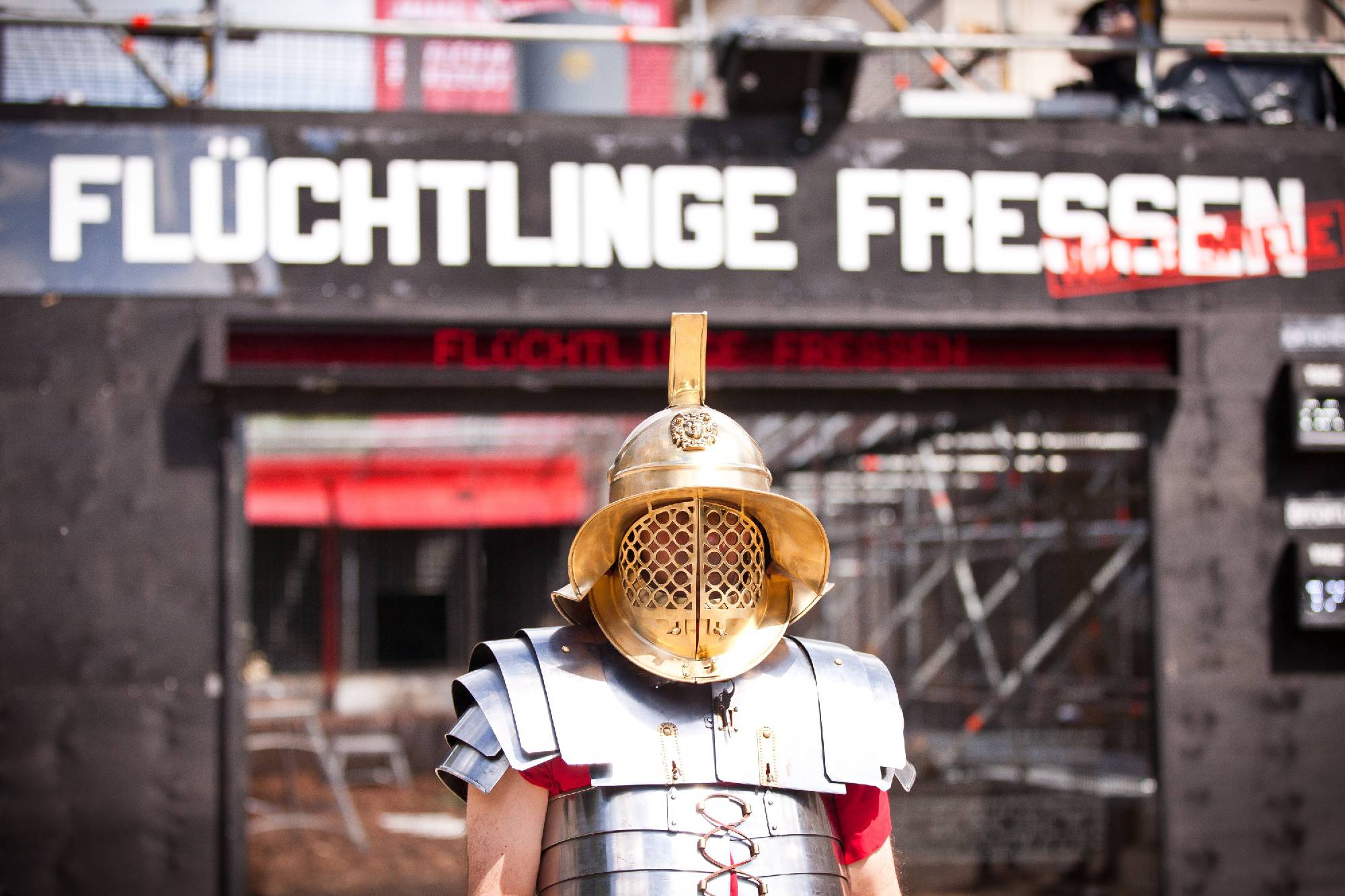 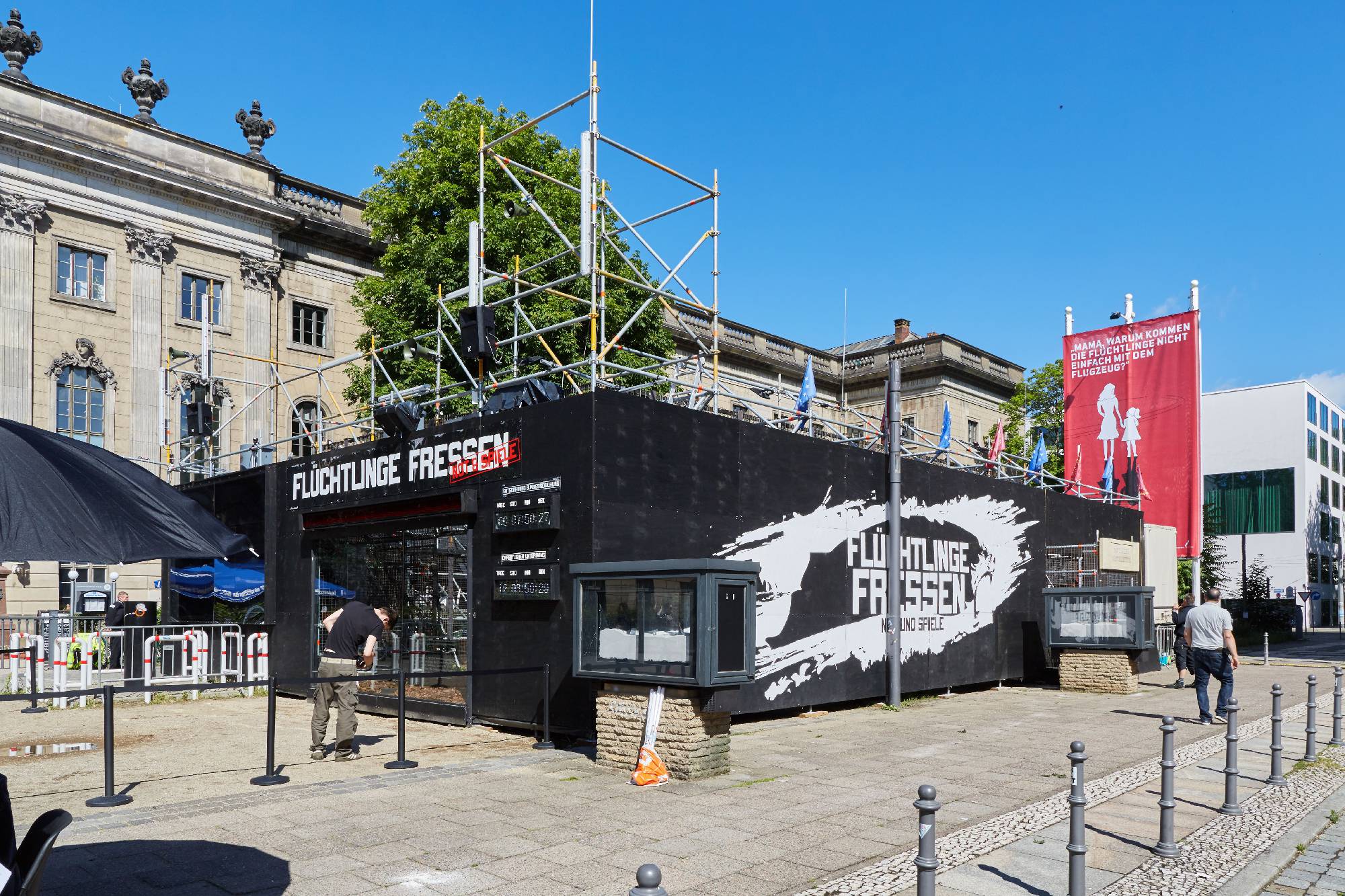 Details of the arena

The gladiatorial interpretation of Europe: The arena is the building type of a condensed deadly trap. Here, fates are generated in front of a large audience - defeats and victories. Spectacles uncover the ideological core of a society, such as letting refugees die in the name of securing the EU's external borders. While the deterrence policy takes a break, the arena gets cleaned and filled with fresh sand.

Through the gate of the Roman goddess of death, the looters of Europe arrive on all fours at the arena.

Above the monument, the original battle cry of the French Revolution flutters in the wind. The last sentence was deleted later on.

The prohibition of transport for refugees is an essential element in the monument. If tigers approach, written law faces natural law.

The monk Telemachus jumps, dressed in white, into the arena to stop the games. In the early 20th century, Emily Davison sets her body in the struggle for equality: She throws herself in front of the King's horse and dies.

The Roman penal law used the wild beasts as a condemnation for slaves, war criminals, and state enemies. These punishments were executed before the actual gladiatorial battles. 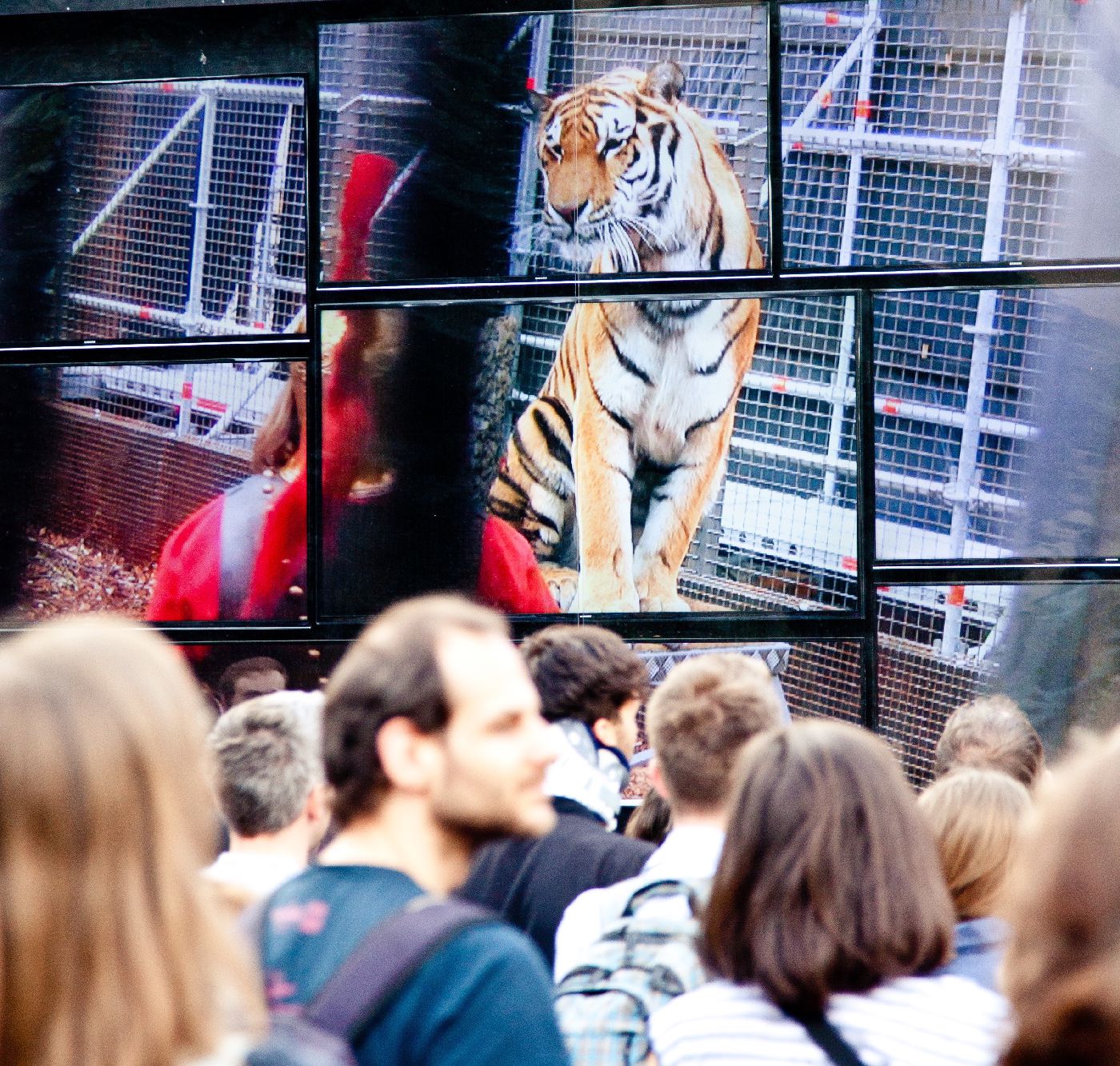 The summer of dying 2016 has dawned. There is no time to lose. Hundreds of thousands of people are drowning again on the Libyan coast. The deletion of a single paragraph in the German law can change this - and thereby still change the fate of Europe’s humanity. The ferry, which ferries from the Turkish mainland to Lesbos, costs less than 10 EUR. The human traffickers demand for the same route in deadly boats up to 2000 EUR. Responsible for this is the EU Directive 2001/51/EC.

The CPB visited and took care of the passengers in Turkey. They are Syrians who have without a doubt the right for asylum (if they take the risk of the murderous way). We sent the passport data and the declaration of intent to the chancellery, the Department for Foreign Affairs, the Ministry of the Interior and the BAMF. As the first plane on behalf of the German civil society, the Joachim 1 will bring people in need on a safe route from Turkey to their loved ones in Germany. There is no political justification for people to be plundered by human traffickers for being either drowned or wade hundreds of kilometres afoot through the mud. 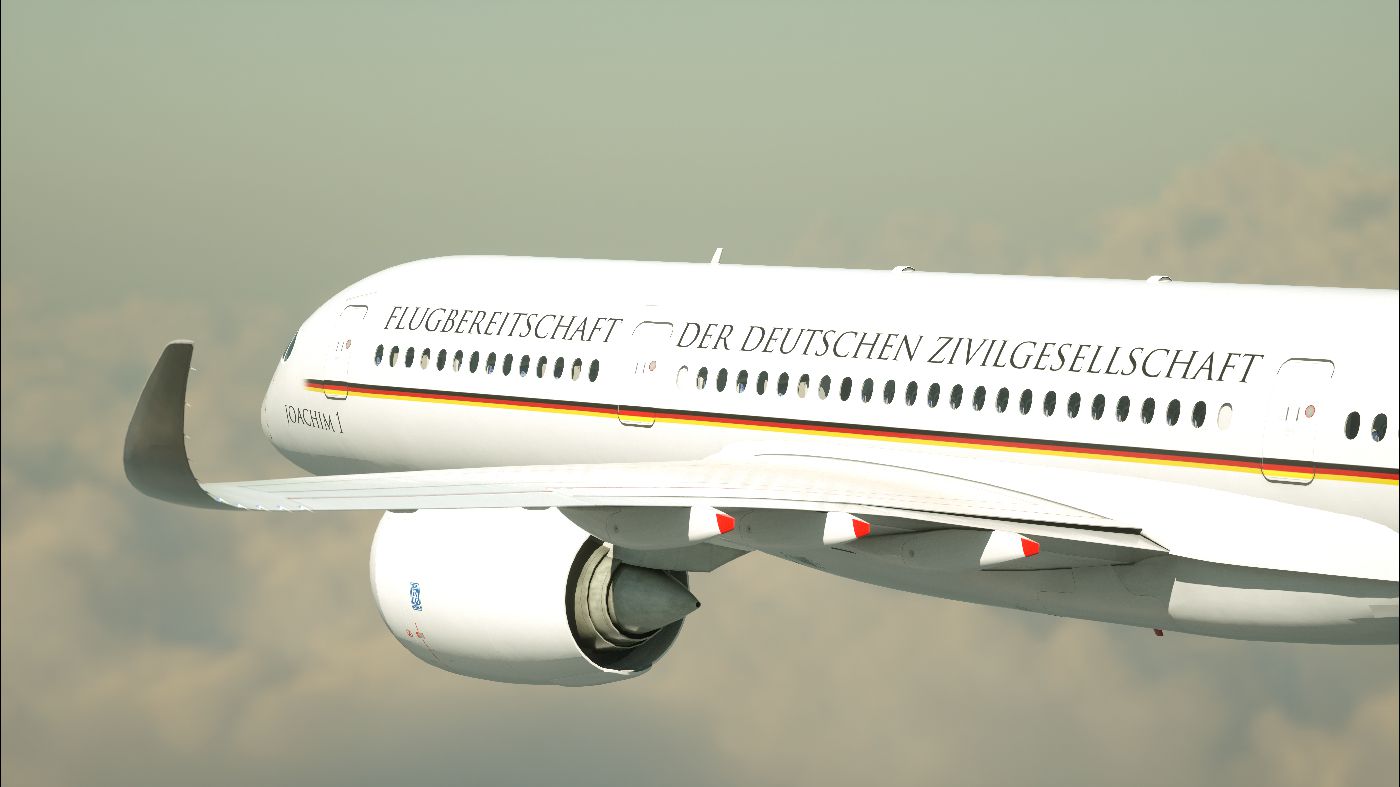 The passengers of the Joachim 1

"Here we should have killed to show that you are acting like animals. But you are not acting like animals. You have strayed from us to be better than us. But you just have strayed from yourselves. We cancelt he final. In the name oft he tigers we leave you alone with your dilemma. We are not the solution. We are the sad performers of your doom. This is too real to be played."

Letter from the tigers to mankind

Why don't refugees take the plane?

It is the basic question of the entire action: it is not the money or will that refugees cannot fly. It is due to a law. A law ensures that people are accused of nature. Ferries that ferry from the Turkish mainland to Lesbos cost less than 10 euros. A plane from Turkey costs less than 100 euros. Human traffickers claim for the same routes 2,000 euros. An EU Directive (2001/51/EC) is responsible for the death of hundreds of thousands of people.

More about the EU Directive (German)

Action against the Federal Government

In the name of 23 refugees, whose entry by plane during the action was refused, we filed a lawsuit against the Federal Government on 19 October 2016. The object is the direct, unlawful interference of the Federal Ministry of the Interior in the action and the unconstitutionality of § 63 of the Residence Act, as well as the EU-Turkey Pact.

In the specific case, the refusal was illegal because of the fact that the residence law was specifically used to prevent the entry of documented, asylum-seeking war refugees. The EU-Turkey pact, on the other hand, breaks the principle of non-refoulement from the Geneva Refugee Convention.

Exberliner  Feeding on refugees: The Center for Political Beauty

npr berlin  Life In Berlin: The Center For Political Beauty Sharpens Its Teeth Once Again 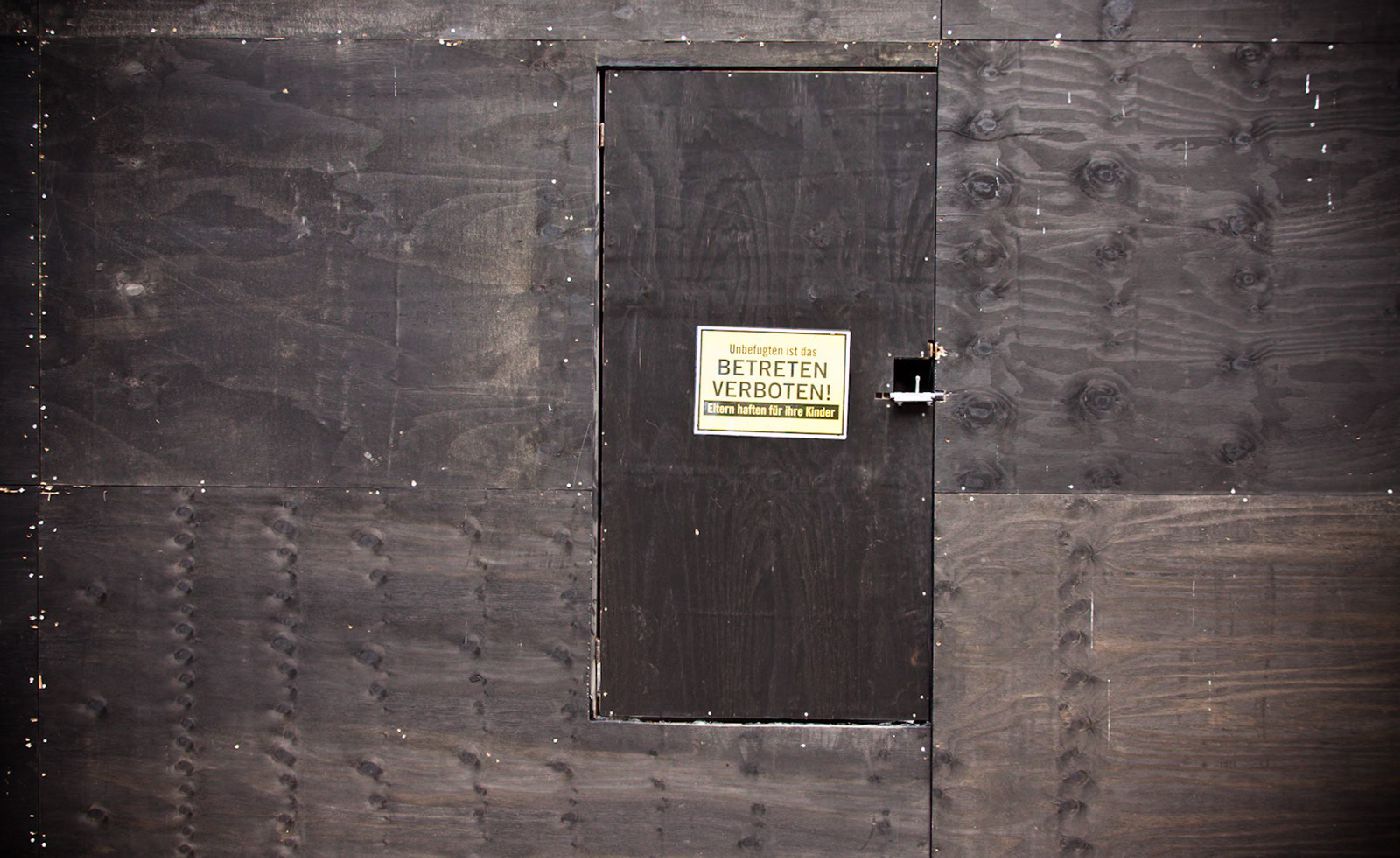