The Dead are Coming

Every day, hundreds of migrants die at Europe’s aggressively sealed-off borders. These borders are the world’s deadliest. Year after year, thousands of people die trying to cross them. The victims of this cordon sanitaire are buried in masses in the hinterland of Southern European states. They have no names. No-one looks for their relatives. No-one brings them flowers.

The Center for Political Beauty took these dead immigrants from the EU’s external borders right to the heart of Europe’s mechanism of defense: to the German capital. Those who died of thirst or hunger at our borders on their way to a new life, were thus able to reach the destination of their dreams beyond their death. Together with the victims’ relatives, we opened inhumane graves, identified and exhumed the bodies and brought them to Germany.

“In light of the fact that the victims did not make it to our country alive, the Center for Political Beauty brings us their bodies. We are being confronted with the consequences of what we do or rather what we don’t do. That is the one thing. The other is: the intervention transforms piles of corpses into individuals who lost their lives. It transforms refugees into people. The intervention also affirms our feeling that we are about to commit grave mistakes. We didn’t ask what happened to those who died. The artist are now doing exactly that. In the year 442 BC, a theatre play was staged in Athens. The heroine of the play was a young woman who defied the ruler’s will, the law so to say. He had ordered that Polynikes should not be buried. The play contained a dialogue between two women. One of them says that she shares the outrage at the ruler’s order but that she cannot muster the courage to stage a rebellion against this decision. Antigone replies: ’Use that excuse, if you like, but I indeed will go and heap a tomb for my dearest brother’. She does wrong in order to do right. It is our hope that we will listen to the dead seeing as we ignored their screams while they were still alive“.

Against every rule of probability, we exhumed a mother who had drowned on her way to Europe - due to our inaction - and was buried as “unknown“ by the authorities in Sicily. We took her to her loved ones in Germany. We were not allowed to bury her two-year-old child with her. Instead, we managed to free a sixteen-year-old from the shackles of bureaucracy. He had collapsed on the trip of horror on the Mediterranean and his body was confiscated by the authorities for ten weeks in order to get his relatives to testify against their smuggler. We gave these migrants the dignity they deserve. But it was not just about saving their dignity. 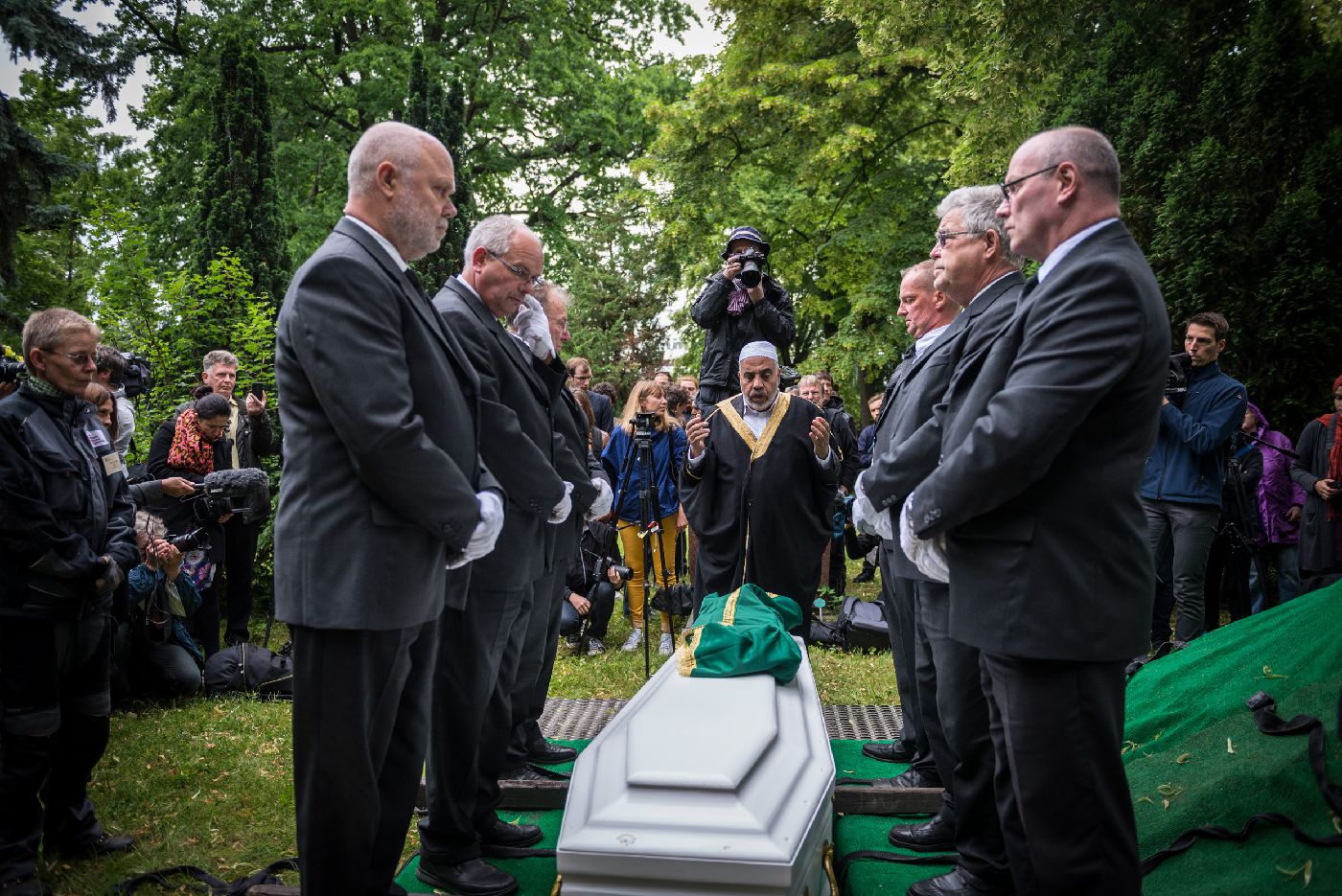 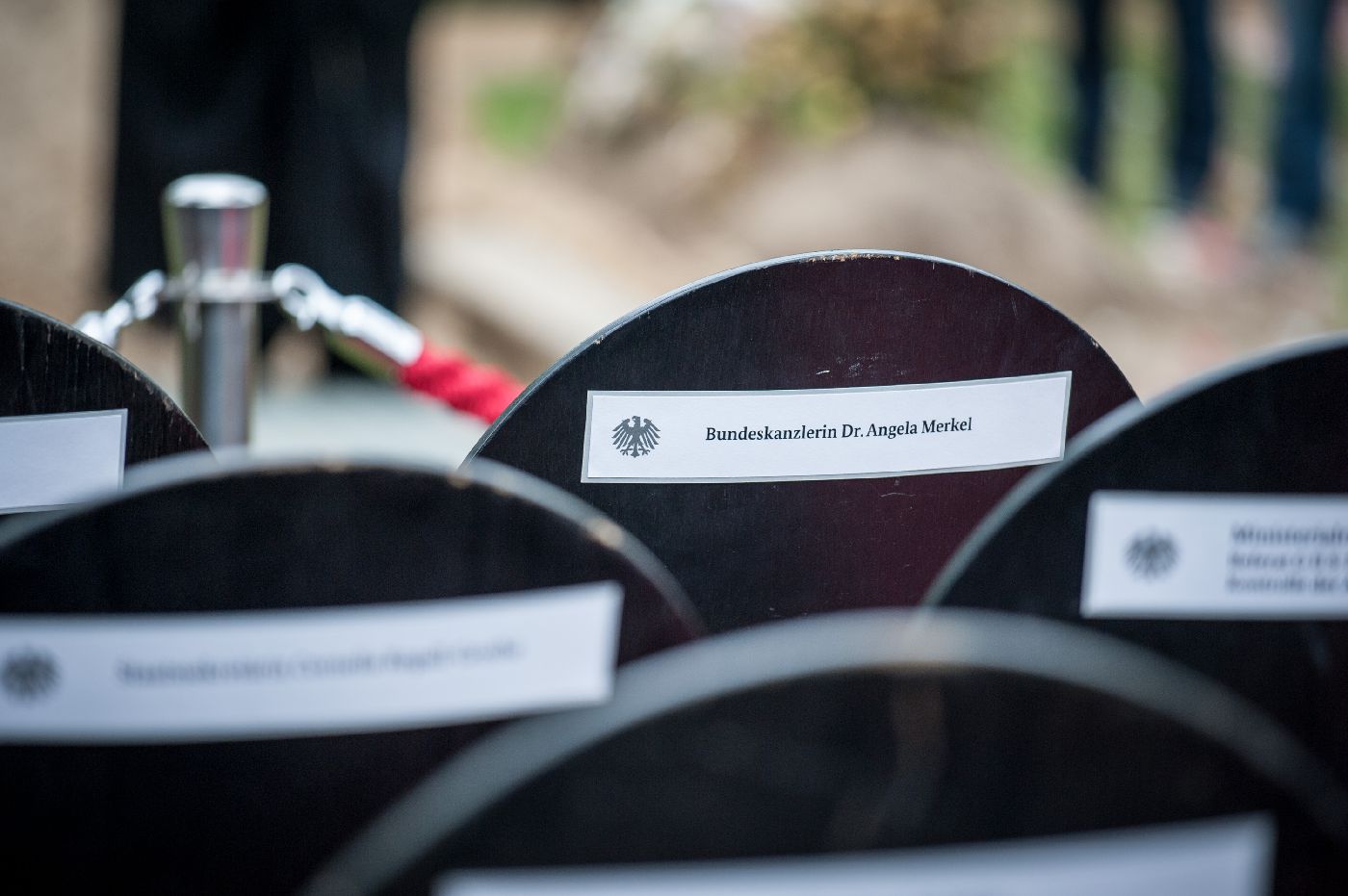 We invited politicians to the funeral. Members of the government, Secretaries of State and representatives of the Federal Ministry of the Interior were all on the guest list. The seating arrangement was fixed in advance: Federal Minister of the Interior Thomas de Maizère with his wife and Chancellor Angela Merkel in the front row. Their eulogies had also been prepared beforehand.

The Local Activists begin wave of refugee burials in Berlin

Al Jazeera 'The dead are coming': Germans dig mock graves for migrants who died at sea

en.qantara.de Creative activism in Berlin on the refugee crisis - "The dead are coming"

euphrates.org The German art of death and politics

opendemocracy.net From a watery grave to a Berlin plot

kaput-mag.com In praise of collective action

i24news.tv 'It is easier to come to Germany as a dead migrant than as a live one'

Memorial: To the Unknown Immigrants

In Greece and Italy there is not enough space to bury the vast number of victims of Europe’s war of defense. We wanted to lay the foundations for a cemetery of superlatives in front of the Federal Chancellery: a memorial to the victims of Europe’s aggressive isolation placed underneath an arch that reads “To the Unknown Immigrants“.

Right after the idea for the cemetery had been announced, these determined members of our civil society set out to build it. They tore down the fence guarding the Parliament’s front lawn and dug hundreds of graves in an act of spontaneity. 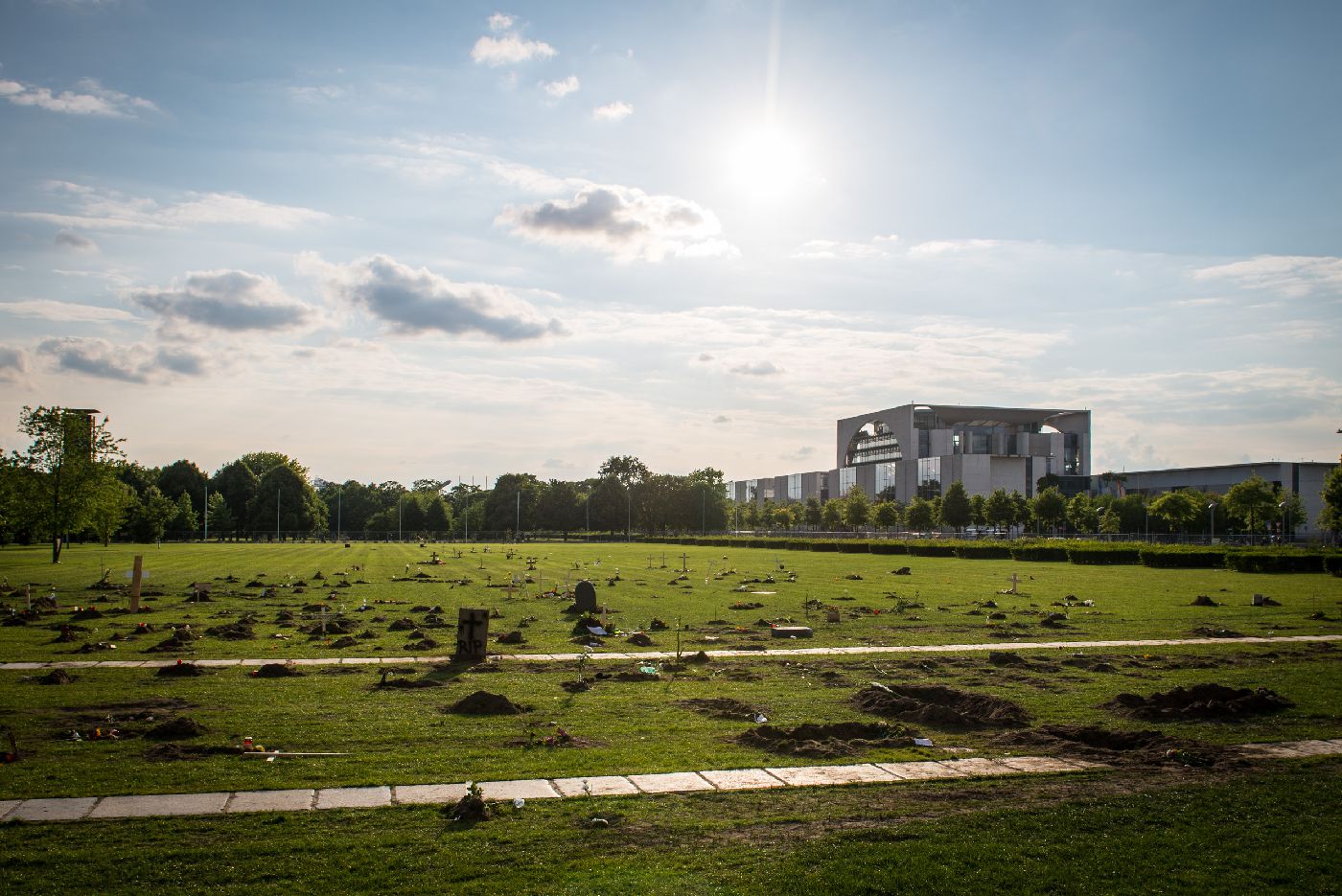 The lawn in front of the parliament turned into an improvised cemetery for the unknown immigrants. 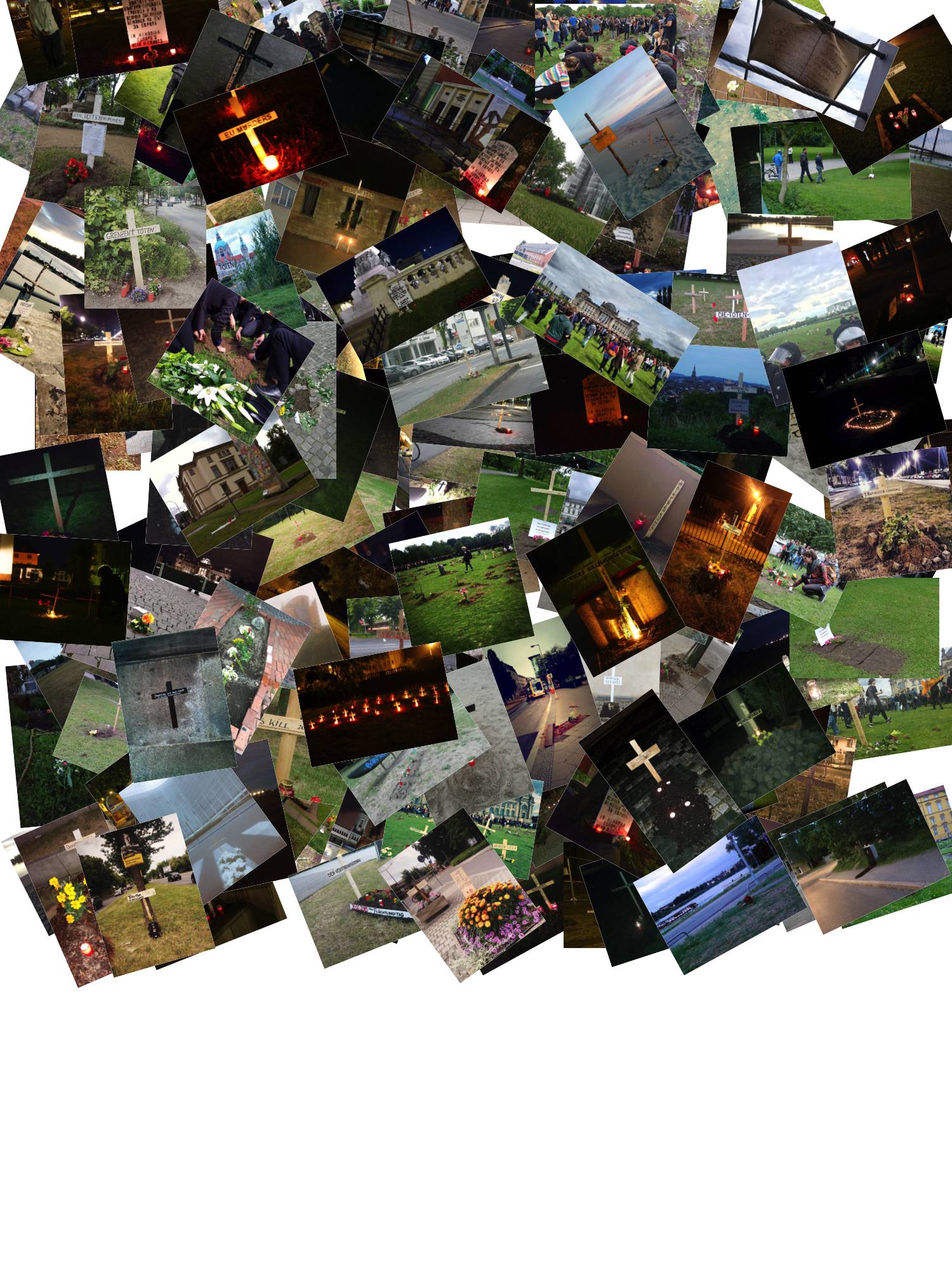 Since then, thousands of graves have been dug in cities all over Europe. 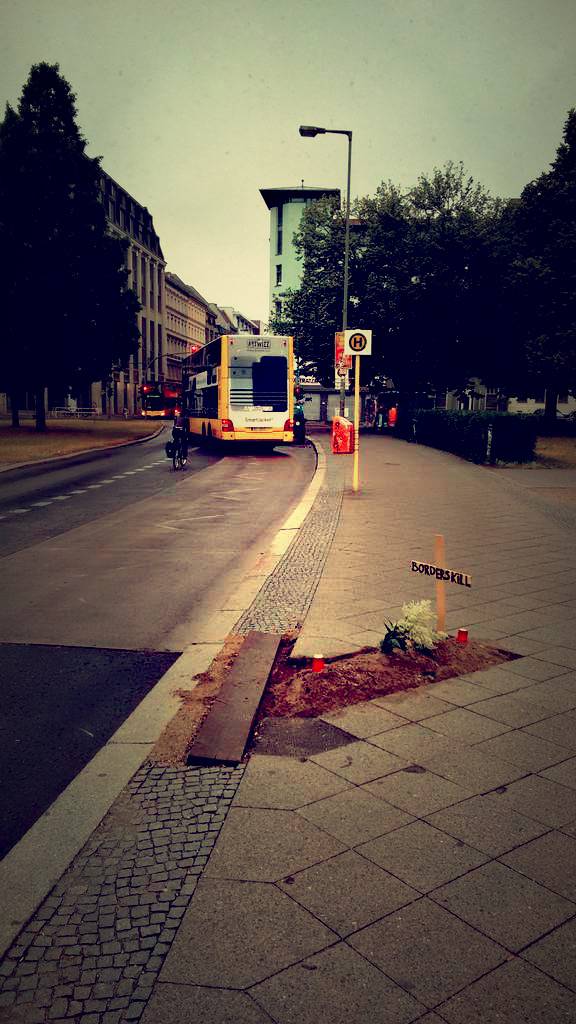 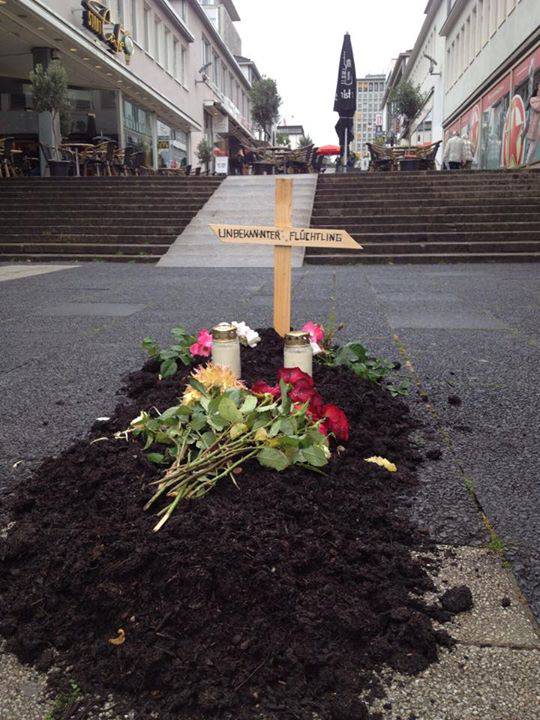 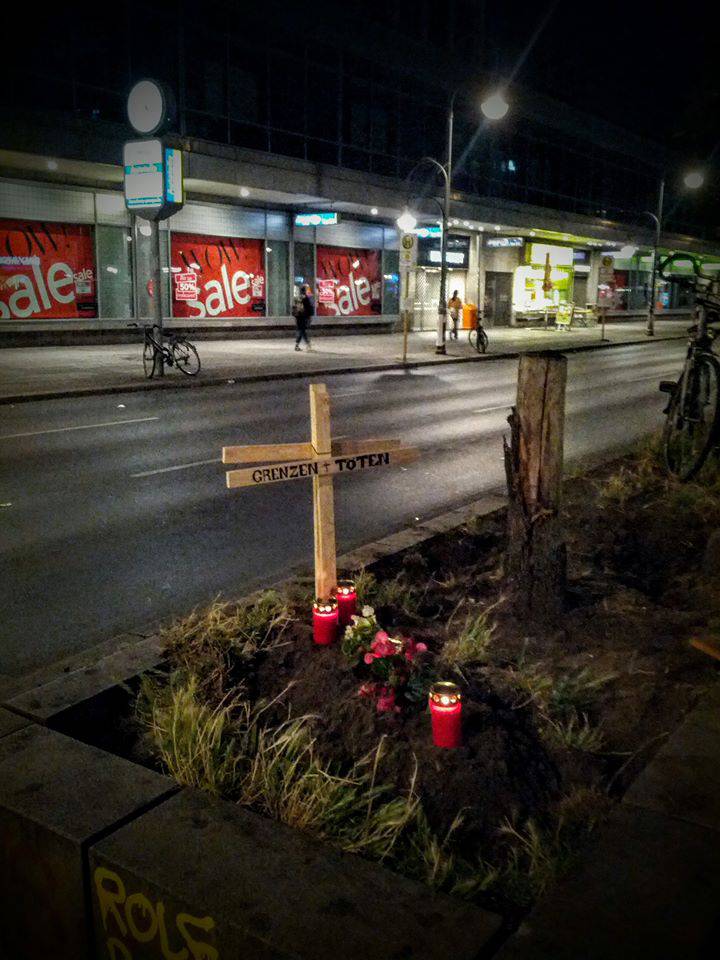 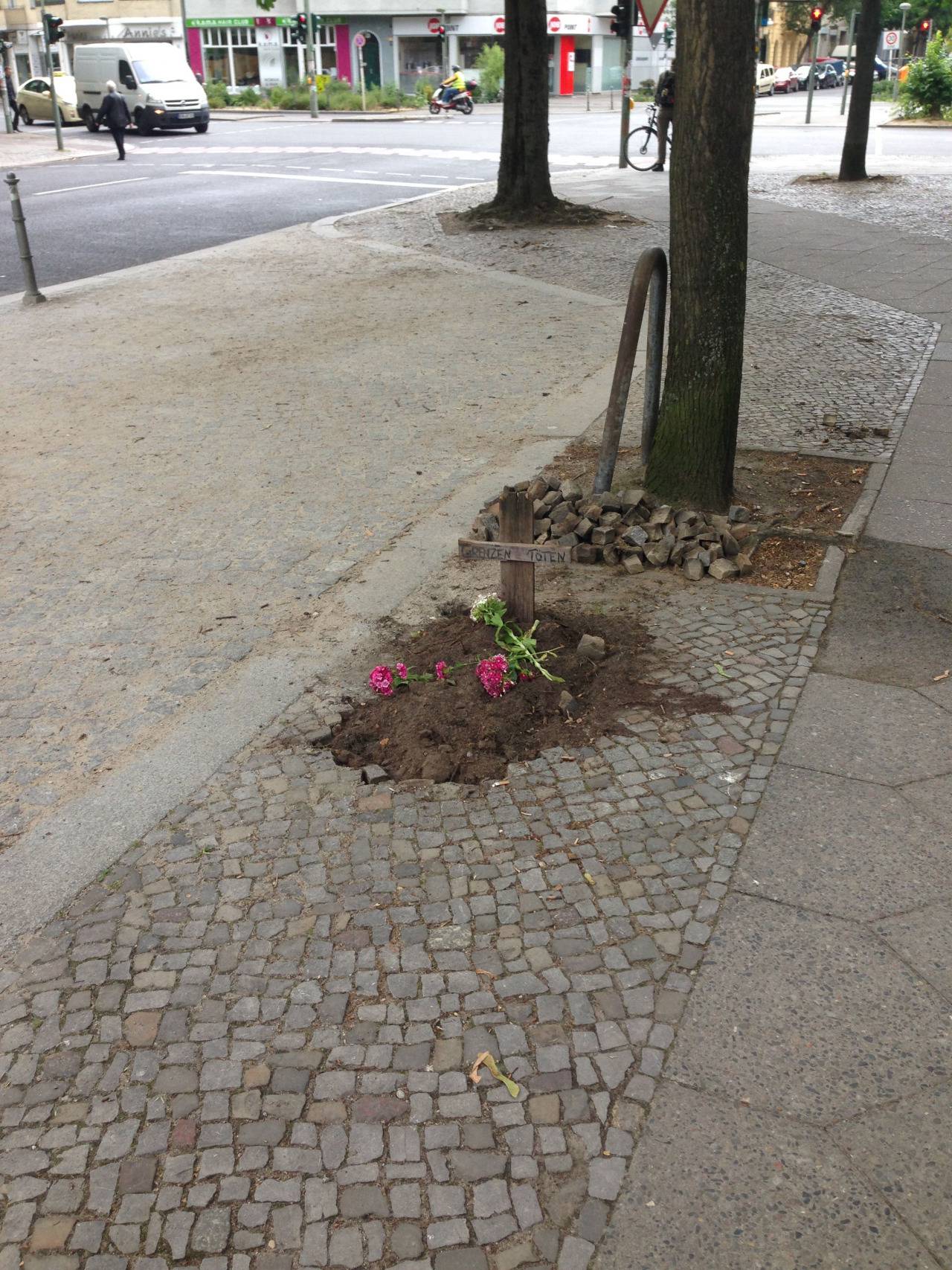 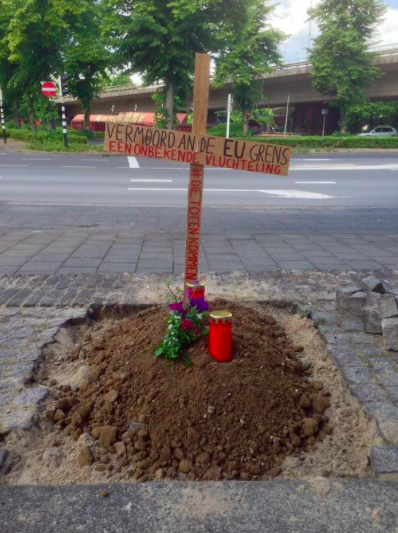 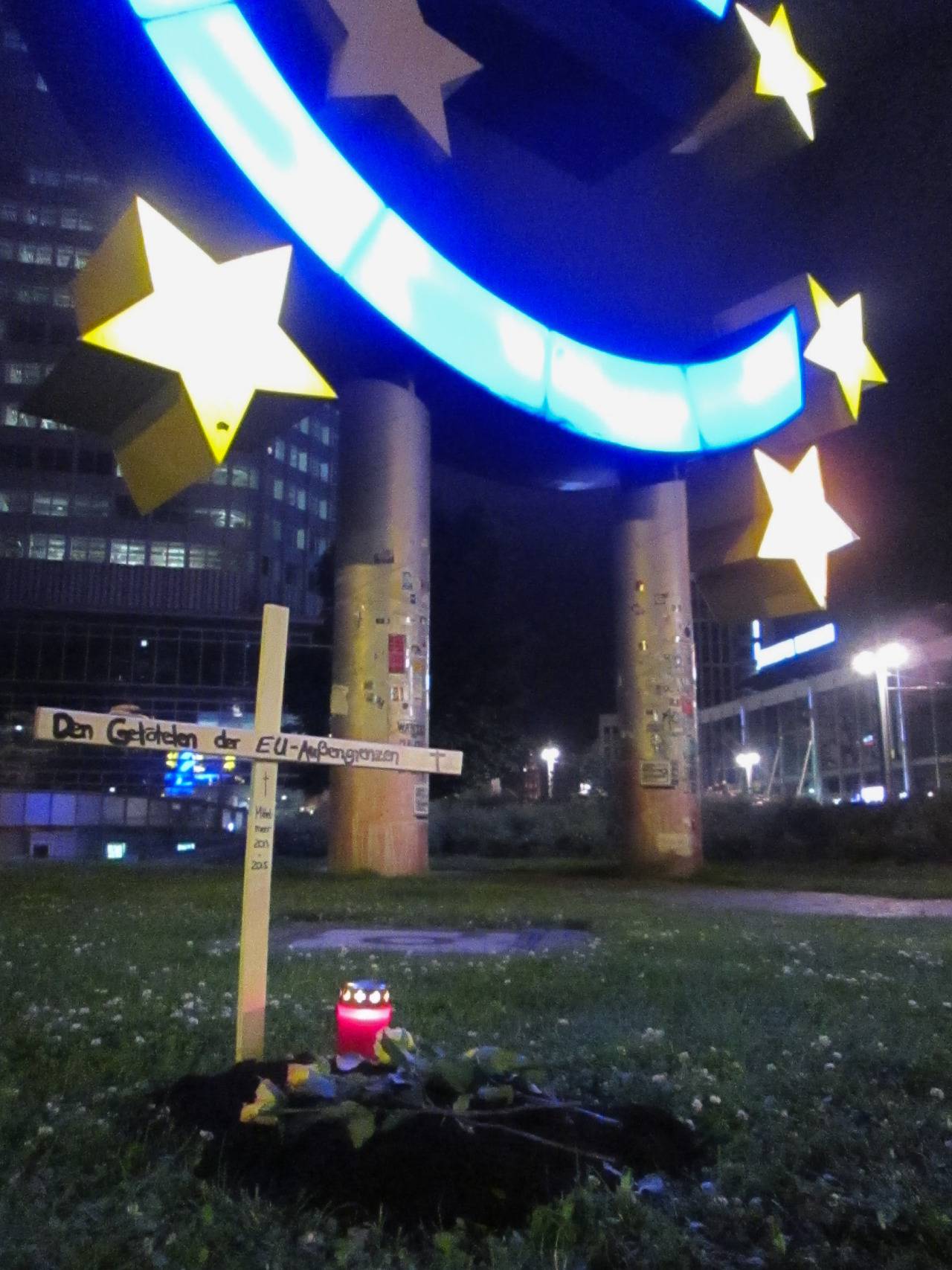 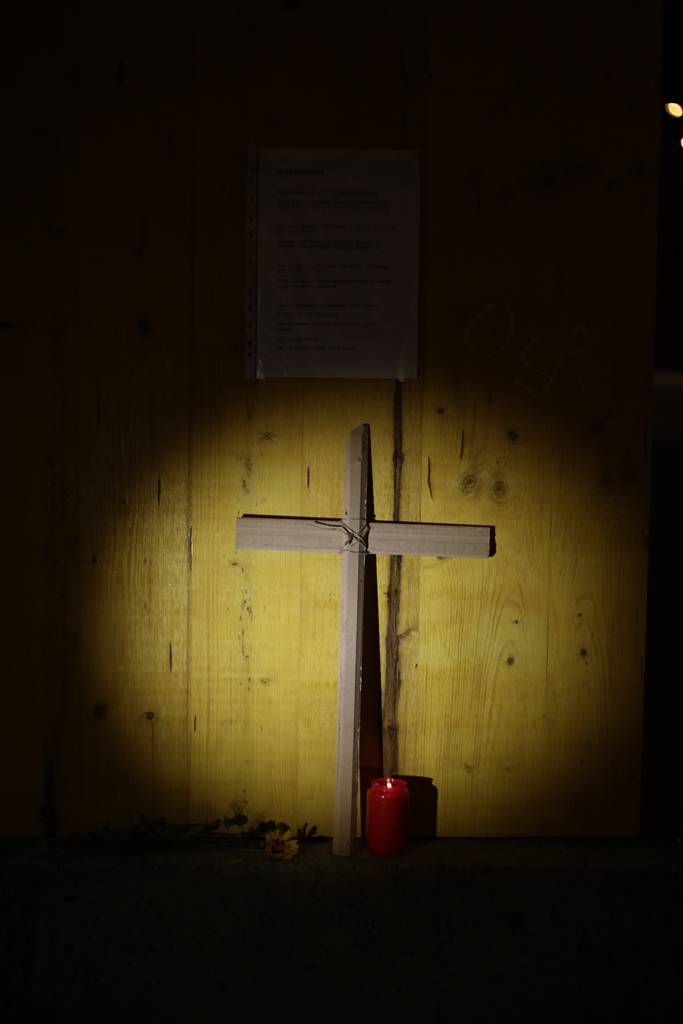 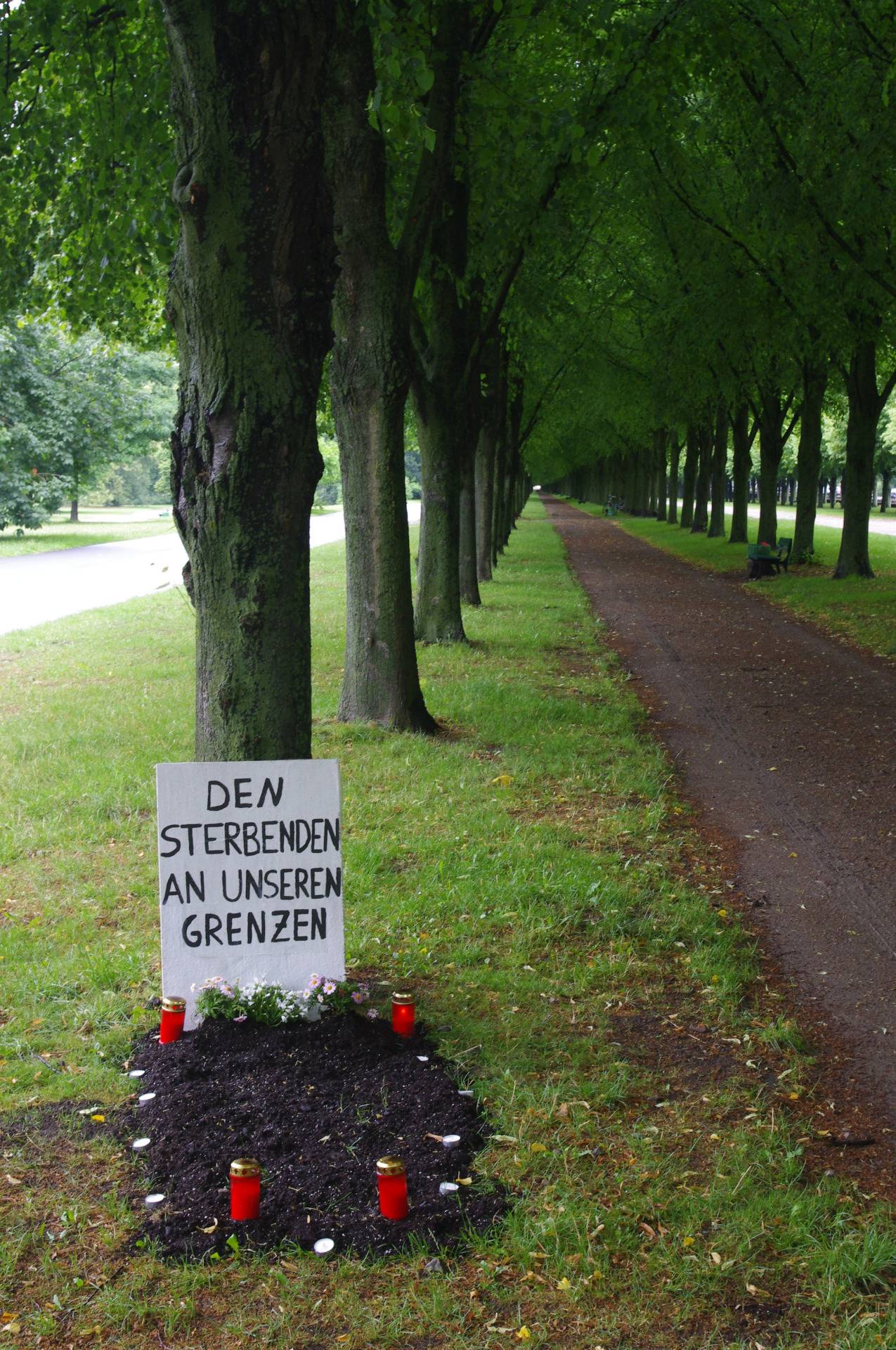 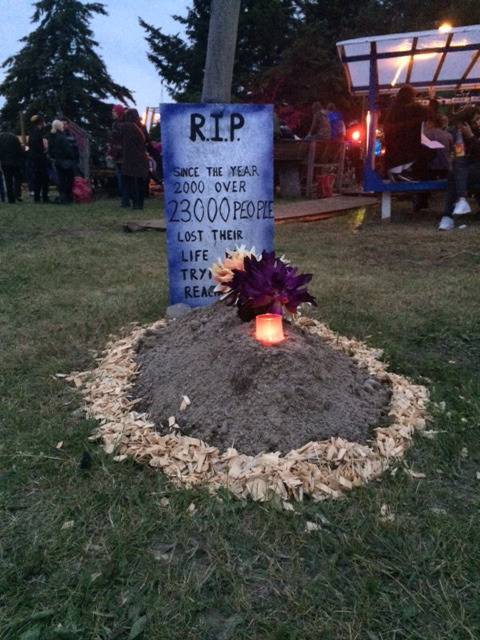 Background: This is how Europe is treating the dead

Sample 1: On 30 May 2015, the media reported the discovery of 17 bodies. This time, however, we were prepared to show the people of Europe what happens to the victims’ bodies. At first, they were put into coffins and displayed at the harbour. Then, they were packed into garbage bags and thrown onto a pile in hospital cooling chamber. Against every form of decency. These are pictures that you were never meant to see. The black puddle on the floor is the leaked blood from 17 people. We won’t show you what it looks like inside the cooling chamber. German newspaper “taz“ decided to find out more about the story behind the pictures.

No-one is meant to see them

Sample 2: Sidiro, Greece: in August 2010, German activists discovered a mass grave with more than 200 bodies. Women, children and men who drowned trying to cross the heavily guarded (at the time by German police) border between Greece and Turkey. Even though the local government had stipulated that the deceased should be washed and buried according to Muslim traditions, the undertaker buried the corpses alongside a sandy path in the Greek hinterland - where they lie to this day. Later on, authorities simply declared the site a cemetery.


Sample 3: 22 January 2015, Catania, Italy: 13 missing persons’ bodies were discovered in a storage hall in Sicily, among them two children. Due to “bureaucratic obstacles“ the bodies had been lying there for eight months.


Sample 4: Italy’s mayors were desperately looking for political support. In Greece, victims are buried according to Muslim traditions. In Italy, they receive a Christian burial. As early as 2013, the Eritrean community complained about the burial practices. So far nothing has happened. 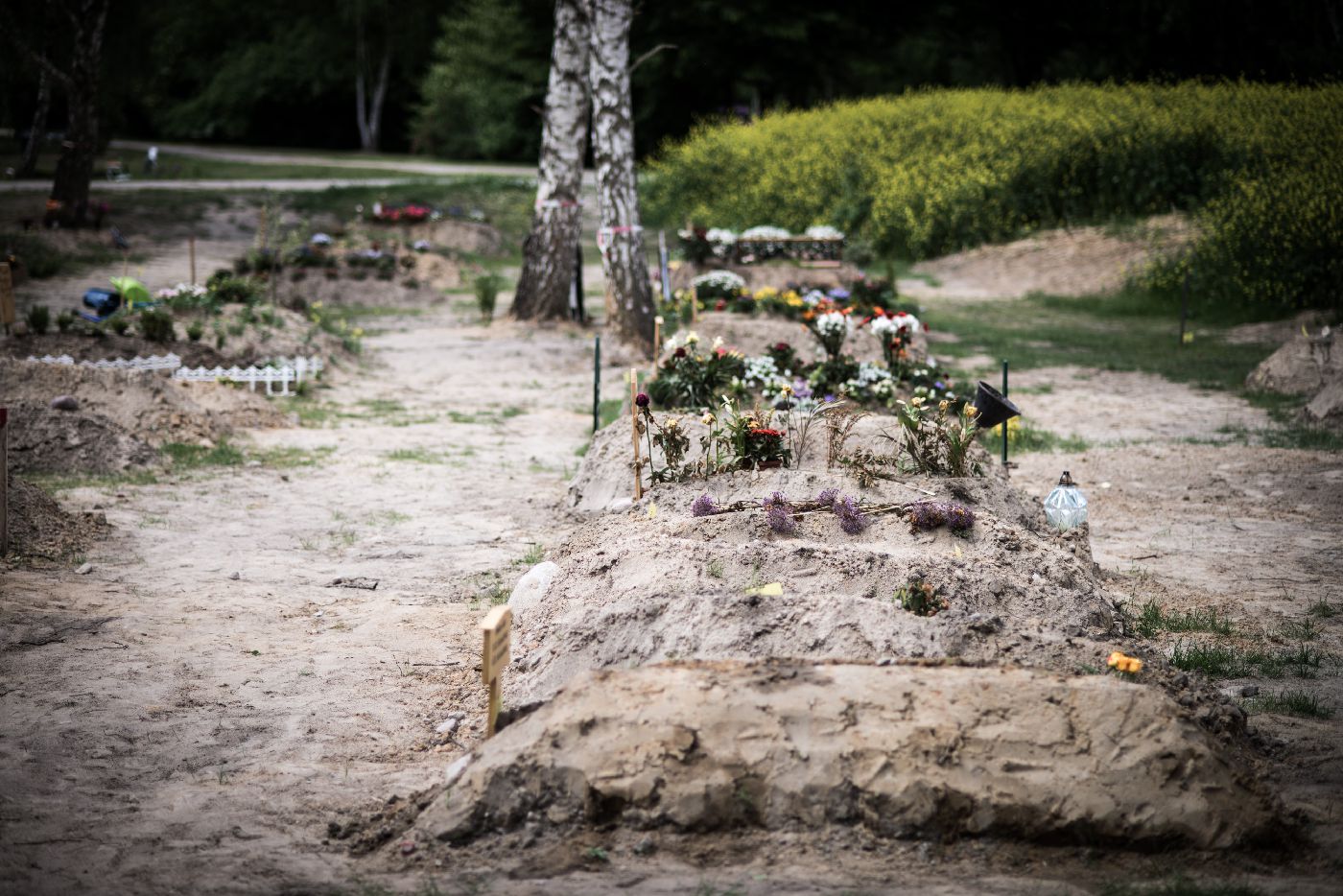